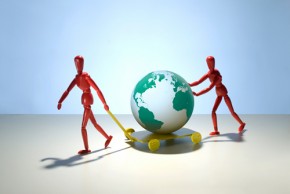 As human beings we all have a need to define ourselves, specify who we are, categorize ourselves in relation to others and find a way to present ourselves to the world. In other words, we all create personal identities, which entail the perception we have about our roles, interests, characteristics, relationships, and membership in social groups. For many of us these identities clearly relate to what we do (i.e. our professions), who we communicate with (i.e. our social circles), and where we live (i.e. the home). Now, what happens when the biggest part of these identity puzzle pieces get lost?

Loss of identity is among the key topics in the context of expatriation, and more specifically in relation to trailing spouses (or, in search of a term with less negative connotations, “travelling spouses”). Naturally, both of the relocating partners will experience drastic changes in their daily lives, social networks and ‘home’ environment, but the trailing spouse is usually the one giving up more. As the term implies, trailing spouses follow their expatriated partner, quite often at the expense of their own careers. Indeed, every year global mobility field surveys (e.g. Brookfield, Cartus) highlight the dual-career issues, where the majority of accompanying partners have a career prior to relocation but are unable to maintain it while abroad. Similarly, empirical research of 264 trailing spouses by McNulty (2012) identified that 79% of spouses were employed before relocation, and only 36% were employed while accompanying their expatriated partners. Therefore, at a time where the expatriated employee is filling in the identity gaps through new career prospects and work-related social networks, accompanying partners need to redefine themself and re-create their new identity from scratch.

As McNulty puts and exemplifies it, ‘at the heart of the dual-career issue appears to be a loss of identity stemming from an inability to obtain paid work. As one spouse said:

I do not live for my husband, nor do I live for his work and the company just couldn’t understand that. He did not marry a housewife and I will never be one’ (pg. 428).

In the same vein, an interesting notion comes from a relevant post in The Telegraph Expat blog. Specifically, the author criticizes the term ‘trailing spouse’ itself, arguing that it is suggestive of ‘jellyfish tendrils trailing listlessly after the principal being with no will of their own’.  Such a comparison demonstrates well the possible lack of a personally important identity, echoing the identity issues emerging as a major finding from McNulty’s research. As such, not living the lives of their expatriated partners, accompanying spouses should recreate their independent and personally meaningful identities.

The telegraph blog post suggests that instead of being trailing spouses, accompanying partners can become talented career chameleons, who achieve professional self-fulfillment also in the new environment. Given the difficulties of continuing a career that was established at home due to visa, language and other possible challenges, accompanying partners might embrace activities related to their hobbies, social and charity work. Moreover, new identities may get a boost from new social networks, whose development may of course be a challenge of its own in a new place and without existing professional network. Here is where external support could be of great help. As McNulty’s results showed, social and professional organizational support were found to be important facilitators of spouses’ identity reconstruction. However, the same results indicate that in reality such assistance is still lacking, and trailing spouses are still in need of organizational support and understanding (see also my previous blog posts here and here).

2 thoughts on “From Trailing Spouse to Career Chameleon: In Search of Identity”