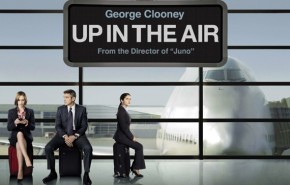 Once in a while it is good to revisit older movies – as is the case with Jason Reitman’s 2009 film ‘Up in the Air’. Naturally, as the film title already suggests, it has spurred both my personal and professional interests. The story has several facets to it, as the movie touches on the difficulties of both firing people and being fired; it is about personal attachments and the lack thereof; it is about travelling for business and having a family back home; and finally, it is a movie about certain choices we make. Yet, the major theme that stood out for me was the dilemmas of ‘living out of a suitcase’, being constantly on the move, having the so-called expat lifestyle.

From the beginning of the movie we follow main character Ryan Bingham on his extremely mobile lifestyle. With a job traveling around the US firing people, Ryan fully enjoys being constantly on the road and travelling for more than 300 days per year. Moreover, following Ryan through his laid-back travels that involve first class seats, efficient and effortless security checks, priority boarding and hotel check-in’s, easily rented cars and 5-star hotels, you can’t help but share this joy. From the bystander’s perspective Ryan’s lifestyle is something to dream about.

Drawing some parallels with the larger theme of global mobility and expatriation, the depicted lifestyle of Ryan Bingham resembles the romantic view of expat life. I believe many people consider going abroad, either temporarily or for good, as a luring ideal of exciting and burden-free life. Indeed, isn’t it a tempting idea that instead of making stable choices and working out your way through all the difficulties and barriers that come with the chosen road, you may just pick another road and start all over again leaving everything else behind? As film director Reitman puts it, “The movie is about the examination of a philosophy – what if you decided to live hub to hub, with nothing, with nobody?”

Living this philosophy, Ryan travels light. The point made in the movie is not only about having a very mobile and light suitcase with four rotating wheels, which is quite a necessity for frequent travellers, but it is also a metaphor used to describe the required amount of belongings and relationships in one’s life. In other words, Ryan’s philosophy is to have as few attachments of any sort, both physical and emotional, as possible. Frequent travelers need to excel in the skill of letting people go (and in Ryan’s case actually in a personal and professional sense). Citing one of the speeches made by the main character, ‘your relationships are the heaviest components in your life’.

At this point the movie starts showing the other side of the coin. When visiting his sister for her wedding, Ryan turns out to be an unexpected and almost forgotten family member. At the same time, his romantic relationship with a similarly-minded expat businesswoman unfolds, and although advocating a ‘no-attachment’ philosophy, he finds it very difficult to separate again at the airport. Finally, the moment he reaches his goal of ten million frequent flyer miles, he realizes he has no one to share the moment with, yet again he is up in the air, yet again all by himself.

Bearing in mind that it is a movie, a drama in particular, I would still argue that the ideas discussed apply to real life as well – namely that an expat lifestyle has various downsides. Literally, being away makes it very difficult to be home, and having what you have while being home is pretty impossible when being away. Naturally, an expat lifestyle does not have to involve such drastic isolation as shown in the movie, yet, one needs to choose and needs to sacrifice. I believe here is where many of an expat lifestyle’s challenges come from as well: the difficulties of maintaining friends at home, and letting go of friends as one moves on, homesickness, separation from family members, feeling misplaced, etc. As discussed in one of my previous blog posts, most probably an expat lifestyle comes at the cost of something that comes with stability.

Yet, many people are willing to make sacrifices, willing to live a more mobile lifestyle, learning to let go, learning to keep in touch over distance and learning to value every moment both here and there. Why? Because of all the magic related to an expat lifestyle, because of the philosophy behind uprooting. As such, an expat lifestyle comes at a cost, but it also has many benefits. The result of the equation is unknown though and will depend on each person…

What is certain to remember from the movie though, is that when sending your employees ‘up in the air’, make sure to provide them with rotating four-wheeled suitcases and make their transition routines as easy as possible.

3 thoughts on “‘Up in the Air’: Exploring the Philosophy”