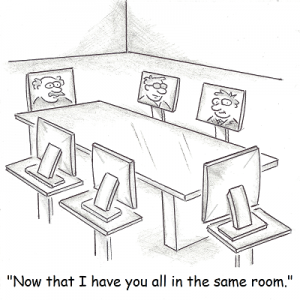 ‘Once upon a time, when people were still using paper and pen for writing up their thoughts and communication implied physical proximity, people used to work together by gathering in one room and discussing different problems and possible solutions…these people would be highly familiar with each other, they would speak the same language, they would look similar, and they would convey their emotions through gestures and facial expressions…’

… Could it be that the above account will be history in a couple of decades? J Given the rapid changes driven by technological advancement and globalization, that might not seem so far fetched anymore, right? Just think about how much the described picture has already changed by now: multicultural teams are ubiquitous, work is geographically dispersed and requires possibly several organizational languages, plenty of meetings and communication are held virtually, and emoji are used to make up for the lack of physical nonverbal cues. As described in one of my previous blog posts, global virtual cooperation and global virtual teams are becoming a common phenomenon in many multinationals, and a common reality for many global leaders. While we used to require leaders to have people skills and organizational skills, today we might as well add ‘virtual’ in front of both of these terms. Does this mean that leaders of virtual teams could implement the same face-to-face leadership practices, just online? Hardly so!

First of all, best practices suggest that leaders of virtual teams should create more structure and be more proactive than leaders in face-to-face environments. There should be a clear structure of who does what and by when, and leaders should try to serve as activity hubs, integrating, sharing and combining diverse information and efforts. Indeed, in face-to-face office settings team members can easily exchange and specify information among themselves while meeting in the ‘coffee-corner’, which might compensate for a lack of structure or clarity sometimes. Given that virtual teams have no ‘coffee-corner’ communication, what is not being pre-agreed upon might remain untold overall.

Second, given the amount of misunderstandings in virtual communication even between co-nationals, we can imagine the same virtual challenges to be even more acute in multinational virtual communication. In groups who see each other daily, the natural process of getting to know each other can quickly minimize these misunderstandings. The virtual setting is different though, and as noted in my other blog post, ‘lacking face-to-face interaction makes virtual teams much more vulnerable to ‘merely working together’’. As such, the naturally emerging familiarity in face-to-face teams might not occur in virtual teams, which is why leaders should pay extra attention for these processes to happen. For example, taking extra time for getting to know each other, setting up group norms, creating unofficial ‘bonding’ opportunities (e.g. virtual coffee break), and investing into some physical meetings, are some of the best practices in use. One strategy that seems especially useful to me is the ‘buddy up’ strategy, which is about having at least two virtual team members in each location, or temporarily allocating the new team member with some senior member for the period of adjustment into the team.

Third, as virtual communication is less engaging than face-to-face communication, special effort should be made to make the former more lively and natural. Using video technology as much as possible is a very good suggestion here. What sounded more interesting for me though, is the researchers’ suggestion to stop muting the calls. On one hand, using the mute function (when not speaking) seems quite logical as it keeps all the extra noise out of the conversation. On the other hand though, it is exactly this extra noise that makes virtual conversations more lively and natural. In essence, hearing your colleagues’ barking dog in the background makes them look more ‘human’ and thus fosters more bonding on the personal level.

Given that all of the above-mentioned points imply extra effort, very explicit communication and very clear structures, having an efficiently working virtual team also seems to imply stable and fixed membership. Although virtual teams can be easily expandable (a new member is virtually a click away), leaders are encouraged to strictly regulate membership and undergo socializing processes with all new team members.