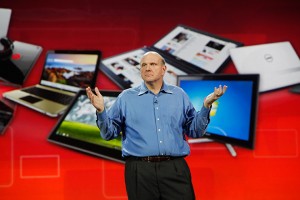 “What happens in Vegas, stays in Vegas” is already a trademark slogan used in the official Las Vegas tourism web site. However, the Consumer Electronic Show (CES) is the exception that proves the rule. Anyone serious about being a techie should pilgrim at least once to CES, which is held at the beginning of January in Las Vegas. Last Sunday, CES ended beating records with more than 20,000 products from 2,700 technology companies and an attendance of more than 140,00 industry professionals. I personally fulfilled my pilgrimage duties by attending CES in 2003, 2004, 2006 and 2007. As tradition dictates, Microsoft, as one of the main sponsors of the event, kicks off the show with a keynote presentation. In my case, it coincided with the last years of the reign of Bill Gates. For instance in 2003, Gates introduced Small Personal Object Technology (SPOT)-based wristwatches. These watches were designed to receive and display continuous, up-to-date information through the use of a FM communication technology. In 2004, Bill Gates announced the Windows Mobile Phone edition for smartphones. 2006 was the year of Vista Windows Operating System (OS). Finally in 2007, Microsoft focused on connected entertainment around the Xbox 360 and the Vista Media Center. In retrospect, Microsoft did not fare very well with those four CES announcements intended to dominate three connected screens: PC, mobile and TV.

For the last three years, I stop attending CES. Although, I recommend and it is a must experience for newcomers. However in a world of “connected experiences”, it is difficult to justify the investment of time, energy and money, when you can follow up to the minute what is happening at the show from any connected device. This year was the year of the tablet. Wait a minute… it was also the theme of CES 2010! As a matter of fact, many of the announced tablets at CES 2010 never reached the market. Nevertheless one tablet, which was not even announced at CES 2010, surpassed all selling expectations: the iPad. Once more, Steve stole the show. And I do not mean Steve Ballmer, Microsoft CEO, but Steve Jobs, Apple CEO. Let’s have a brief flashback. During CES 2007, Apple announced at the same time but in MacWorld in San Francisco the iPhone. A handset that has changed the mobile industry as a whole. It forced competitors to halt ongoing projects and start from scratch to compete with the iPhone. For instance, Microsoft redefined completely its mobility strategy launching last summer Windows 7 Phone. It took a year before the mobile industry could react and compete with the iPhone. Furthermore, it took three years to Android, the free OS from Google, to be the fastest-growing OS for smartphones over iOS (Apple). However, Apple could possibly retake soon the leading position with yesterday’s announcement that the iPhone 4 will be available on Verizon network this February. 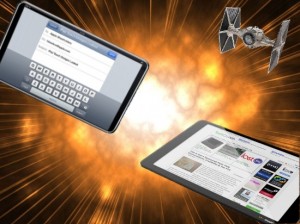 History repeats itself with the iPad. None of the announced tablets in CES 2010 were prepared to compete with the performance of the iPad. For this reason, CES 2011 was again the year of the tablet. This time, Google introduced Honeycomb or Android 3.0 ready for tablets. Moreover, this CES edition showcased more than new 100 tablets, most of them running either with Android or Windows 7. In fact, Steve Ballmer devoted his keynote presentation to three main areas: gaming, mobility and Windows 7 PCs. Where the tablets were only another form factor that a PC running Windows 7 can be sold. Ballmer also indicated that Windows 7 is the fastest-selling operating system in history, with 20% of all PCs connected to the Internet. Nonetheless, this percentage is far away from the 95% market share of all the PCs sold in 2000 that Microsoft had in 2000 according to a Gartner report. Ten years later, if we take into account the 500 million PCs and smartphones sold in 2010, Microsoft reduced its market share to 70%. Besides, it is expected that in 2011 that figure will drop to 50% market share, and according to a recent Forrester report, 50% of all PC sold in 2015 in the US will be tablets. In other words, the OS battles we are currently witnessing in the mobile industry are shifting to the PC industry, which Microsoft has been dominating for the last twenty years. “The Art of War.com” reads that if you want to win those OS battles, it is necessary to invoke again Ballmer’s outcry “developers! developers!” to lock-in customers in your platform. The only difference now is that we called these software Apps. Apps that can run in your smartphone, your tablet and/or your desktop that can be easily downloaded from online stores. With the current force distribution, it is unlikely that a winner-takes-it-all scenario will happen again. I bet we are going to live together with Windows 7, Android (and Chrome OS for netbooks) and iOS as the main brands to navigate the cloud in the coming years. Meanwhile, I can attend another CES in the comfort of my own tablet. Although, Apple, the manufacturer of my tablet, which is the largest consumer electronics company in the world in market capitalization ($313 billions), is always the absent player in CES but the one which is stealing the show since 2007.

Javier Zamora is currently senior lecturer in the Department of Information Systems. He received his Ph.D. in Electrical Engineering from Columbia University, and his M.Sc. in Telecommunications Engineering from the Universitat Politècnica de Catalunya. He holds also a PDG from IESE.