It was 180 days after leaving Barcelona when I finally had the courage to recollect the memories of my two years there since I was afraid of the effect they would have on me.

In late August 2012, I was scarcely 25 years old. I grew up in Beijing and earned my master’s degree in engineering in the U.S., and spoke no Spanish at the time. I had been married for 2.5 years but maintained a long-distance relationship with my husband. I was unaware, yet at the same time curious, of what the future would hold. We made up our minds to go to Barcelona, packing nearly all our belongings in six pieces of luggage. Memories of breathing in moist sea air after getting off the plane and seeing the gilded streets at sunset from the taxi are still fresh in my mind.

We began our life together with challenges. My husband was always working on case studies and team projects during the first year, which often made his eyes bloodshot and brow furrowed. I gradually became involved in the IESE community. I became the first and the only member from China in the MBA Partner and Families Club at the time, but never felt lonely because of the numerous good friends I made there. I slowly began to learn Spanish to become more independent in such an unfamiliar cultural environment. Thanks to this experience, today I have a restless and youthful spirit even though my work is to some degree dull. After work, I am eager to do the housework and take part in different activities that interest me.

In the second year, we were more comfortable with our life at IESE. My husband wasn’t as busy and I began to travel and prepare for the DELE (Diploma of Spanish as a Foreign Language). I often went to the library, spent time on my courses and exercised, which led to such a satisfying life. I came to realize what I really needed, and broke my objectives down into steps and took them one by one. I became good at life, study and traveling. My husband also relaxed. I can still remember the time when he cooked my favorite prawns and served them to me, which gave me such a feeling of security. Our little flat we rented was filled with love. 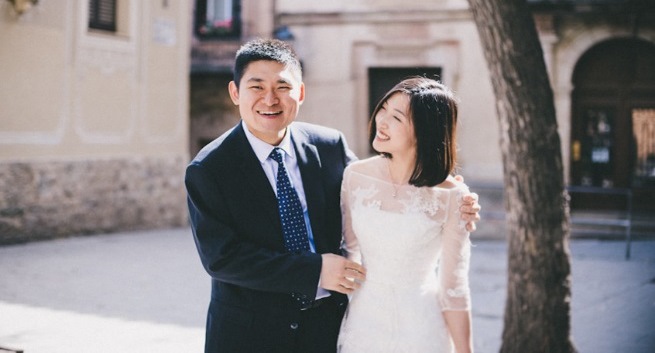 My memories of Barcelona are still fresh: Every day I went to a nearby café, ordered a cortado and wrote something on impulse. I would drop by the local bakery to buy the freshest baguette. I would go to the market, point to the fresh prawns and request “Medio kilo, por favor.” I would go to the gym and try my best to follow the instructions in Catalan and respond in my not-perfect Spanish. I would spend an entire day in the IESE library with two rice balls, visit friends and share our interesting and crazy experiences. I remember persuading my husband to go on a hike, during which we were silent but nonetheless felt content and understood. On weekdays I would go to a family-owned restaurant and order the menú del dia, which was cheap and tasty. After arriving home, I would leave the shades down, lay down and feel enveloped by a light breeze and classical guitar music. All of these moments seemed unimportant at that time but are of inestimable value now.

In May 2014, we took our wedding photos in Barcelona. When we were married, we had no wedding ceremony, no diamond ring, or the adult faces we have now. But in Barcelona, our beloved city, we had our best moment recorded and witnessed by our parents and by each other.

I would like to extend my sincere thanks to Barcelona, where I met a broader world. In Barcelona, I came to understand and challenge myself. We are now about to start a new life–in five days, we will move to a new place. But we are not afraid, because we know that people move on by saying goodbye to the past and facing the challenges that lie ahead.

I have no idea where I will settle down. But I am always repeating the same prayer: I will come across you, IESE and Barcelona. 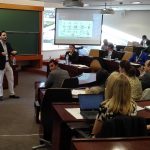 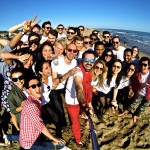 My Experiences at the MBA World Summit 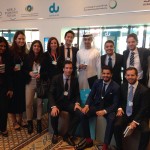 Our Experience in the World Government Summit 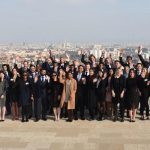 The Deaf Community, International Teams and Consulting for Startups – Learnings from the Roland Berger Case Competition