The Nairobi overseas module is one of the unique highlights of IESE MBA. Joe Lobo, MBA Class of 2022 shares some of his learnings from this unforgettable week.

Those were the cries I could hear as I sat amongst my classmates on a cold, wet November morning on a boat down a river in Valencia as 15 pairs of eyes looked down on their phones to find out one of the most important pieces of information in the second year. Whether or not you had managed to get on the Nairobi Overseas Module.

In second year students have to bid for the classes they want to take. Inevitably the most popular one is the Nairobi module in which you have the privilege of spending a week at Strathmore Business School (SBS) gaining valuable insight into how to do business in both Kenya and Africa. When you speak to alumni about their IESE experience, more often than not you are told to do everything you can to take this module. Expectations were high.

I was one of the lucky 50 students to secure my position and in January we were off on our African adventure.

Our first day at SBS, ready to start our African adventure!

It quickly became apparent as soon as classes started that time in Kenya moves differently to Europe. Classes would begin late, speakers would overrun and lunches/dinners were held at different times each day.

As a Londoner used to running around at 100km an hour and arriving to events early it was something I struggled to get used to. However, we came to find that many Kenyans openly accept and even embrace their flexibility with the concept of time. Indeed, as one of the SBS EMBA students told me, ‘time is nothing but a number to put on the invite!’

There are some advantages to this laidback approach to time. Events feel a lot more relaxed and you are able to really engage with people without constantly checking your phone to see when you need to leave. However, if you come to Kenya from a country obsessed about punctuality then I would get ready to let go of all your time-related inhibitions and try to go with the flow.

Taking a break on the weekend to explore the beautiful country.

Africa and Kenya are not the same

An obvious statement I know but it’s one that non-Africans (myself included) can be guilty of assuming. Many of us will believe that Africans have one identity but that is far from the case.

Kenya is different to its neighbouring countries in many ways. While it is true that one of the official languages, Swahili, is spoken in multiple countries, Kenya is also home to 67 other languages and a variety of different communities such as the Kikuyu or Luhya tribes.

It was interesting to hear Dr Frederick Ogola, the SBS MBA programme’s academic director and our main professor while in Kenya, tell us that when Kenyans talk about where they’re from they don’t mean where they were born. Rather, they will tell you which tribal village their family is from – even if they’ve never set foot there. Their pride in their identity and their roots really stood out to me.

Negotiating with a Kenyan

One of my favourite experiences during the week was the negotiation session in which a team of us from a similar country or region with a similar approach to business negotiates with Kenyan SBS students over purchasing machinery.

The British do not tend to like haggling over prices and I think have a tendency to treat information at face value. We believed that the Kenyans would be very relaxed and would prefer to engage in small talk before reaching an agreement.

However, that was far from the case. As soon as we sat down our adversaries were straight to business, offering a price so far out of our range we had to leave the room to check we had done our numbers correctly. After an intense hour full of apparent time wasting by the Kenyan SBS students, we walked away with a deal – just 50 cents below our limit.

During negotiations, it was not easy to convince our counterparts to take the deal!

One of the students told us later over drinks that they had even looked at our notes while we were out of the room to see if they could find out our strategy. We learned an important lesson: if you’re negotiating with a Kenyan, you’re probably going to lose. And keep your notes safe!

One of the first questions a non-African will ask about business in Kenya is how much you need to spend on bribes. And it is true, bribery does exist in the country. It was disheartening to hear from a senior business leader in Nairobi about how policemen had attempted to solicit bribes from him on two separate occasions while he was driving. But it was refreshing to hear how he’d refused to be bribed both times. Yes, corruption is a problem in Kenya but the intent is there to solve it.

However, there are different forms of corruption universally. Corruption is not unique to Kenya or Africa. In the last few years in the UK, for example, we have seen a number of scandals surrounding lobbying, which you could argue is a watered-down version of corruption. UK’s leaders also tend to come from the same backgrounds and institutions and you regularly hear how people have secured jobs because of family connections. Again, this may not be perceived by Westerners to be corruption but when you are valuing background over ability something doesn’t feel right.

An experience that I think will stay with all of the MBAs on the Nairobi module was our trip to visit New Horizon Secondary School in Kibera, the largest slum in Nairobi.

My initial fears of it being nothing other than slum tourism were misplaced as we sat down with the 16 year-old students to share life experiences. What stood out to me was the ambition of the students who dealt with difficult circumstances to spend six days a week studying. I loved hearing their plans to become doctors, engineers and developers while debating with them whether or not Arsenal would qualify for the Champions League – Kenyan teenagers love their football. Leaving them brought tears to my eyes and I know I wasn’t the only one. 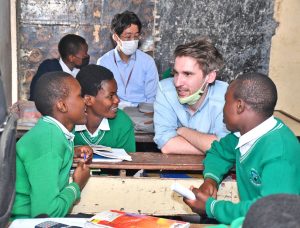 Interacting with some local students in Kibera was one of most meaningful moments during the module.

Yet another interesting lesson came from Dr Ogola who explained to us how some Kenyans saw unemployed Europeans as lazy because, instead of doing what it takes to earn money by working across the continent as chefs, cleaners or any other job, they preferred to stay at home earning nothing. While I understand that it is a complex topic and perhaps did not entirely agree, it was a point which reminded me about the importance of work ethic.

Africans are known for their warmth and friendliness but the Kenyan people at SBS surpassed even my lofty expectations. Staff and students went out of their way to teach us about their culture, from the language to the best bars and restaurants and even how to dance to Afrobeats music. Predictably, I was terrible at the latter – some stereotypes never die and the Brits and their potentially offensive dance moves is one of them.

Perhaps the most touching moment was when the SBS students paid for us to go to dinner with them at a popular local meat restaurant. Not only that but they presented each one of us with a beautiful  blanket from the Maasai tribe of Kenya with our names engraved on it.

With our lovely parting gifts, thank you to our amazing hosts in Nairobi!

Moments like these make you think that, regardless of your culture, there are always ways you can do better to make sure those around you feel welcomed. It is something I’m trying to improve based on my Nairobi experience.

As we landed back in Barcelona, fellow classmate Aviad Rabinovitch and I looked at each other before we headed to our homes and said one thing, ‘What a trip!’ It may have lasted only a week but the business and cultural lessons from Nairobi will stay with me forever. 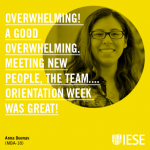