The cavalry is not coming.

This pandemic has been called “a dress rehearsal for climate change.” And yet…it is much shorter-lived, at a much smaller scale of human and economic devastation, perpetrated by a culprit that’s easier to single out and solvable by methods within our grasp. Consider, on the other hand, everything humans have built since the 19th century, and now think of re-engineering it. Take your pick of the myriad calamities that have tormented humans throughout history –droughts, storms, fires, floods, plagues, wars, refugee crises, economic and sociopolitical collapse– and now imagine preparing for conditions that would increase them in frequency, scale, and depth. It would be more appropriate to compare the coronavirus response to a rough draft of the script that must dominate this century.

The cavalry is not coming.

An optimistic streak and a career in PR have ingrained in me an impulse to reject gloom and highlight the bright side, always the bright side. This time I will refrain. The stakes are too high, so let me be blunt.

Bill Gates will not save us.

AOC’s Green New Deal will not save us.

Xi Jinping’s Green Belt and Road will not save us.

Greta Thunberg and the rest of her generation will not save us.

Patagonia and Tesla and Siemens and that Business Roundtable statement will not save us.

Of course, these leaders contribute significantly to climate action. But to believe they alone will prevail while we retreat into our ordinary lives, expecting any day now to see the headline pop up in our daily FT newsletters –“Climate Change Solved (That was close!)”– is to be reductive, irrational, and irresponsible.

I am begging you: Fall not into the dreamless sleep of bystander complacency. Resist the siren call of inaction. Come to the helm and steer.

This is not about switching to a bamboo toothbrush. I am challenging you to step up as a leader in your post-MBA career and become fully engaged in climate action through your company. To fight, hard, because if the current best case scenario for the future is shameful, settling for second best is downright unforgivable.

Over the next ten to twenty years your career will soar. Of this I have no doubt, not only because of your inherent intelligence and abilities –and they are astonishing– but because you are already at the top. No, really. IESE diploma in (virtual) hand, there is no one more educated, more well-connected, more capable of making a difference than you.

These ten to twenty years coincide with the narrow window that remains to avoid the bleakest of possible scenarios, having accepted begrudgingly the grim outcomes at 2℃ of warming, the Paris Accord target. (Entire island nations wiped off the map, over 150 million people dead from air pollution, a fifth of plant and animal species decimated are just a few of the realities we’ll confront within our lifetimes.) That’s just a couple of decades to overhaul the world’s energy sources, manufacturing processes, consumption habits, waste management systems, incentive schemes, and political apparatuses.

Finally awake, many companies –most likely your future employers and clients– are weaning themselves off carbon, setting what sound like aggressive sustainability goals, rolling out glossy CSR websites and stirring videos showcasing their commitment to…what, exactly? To do everything in their power to avoid catastrophic warming, or just enough to inoculate them against regulators and journalists who are out for blood?

Forgive my knee-jerk skepticism. Surely individual companies are all over the spectrum. But putting out a press release is easy; making good on those promises is the hard and often under reported part. On the whole, corporations will drag their feet on climate action because a tremendous amount of effort goes into taking half a step in the right direction: endless stakeholder negotiations, managing competing priorities, tackling unexpected obstacles, and of course, budgetary constraints. So I am begging you again to speed up progress, stake bold claims and hold yourself –and soon your team, your department, your company– accountable, because we have no time to waste. Be one of the crusaders, not one of the holdouts.

I’m signing off without a call to action: No petition for you to sign, no “simple steps to get started.” That is a capital sin of activism writing, but you are smart enough to know what to Google, should you choose to. What I will do is help you recognize the moment you must act.

It will come in the shape of an inconvenient question you’ll think twice about asking at a high-profile meeting. It will nag at you when you encounter corporate inaction that your brilliant mind will race to justify. And yes, it will stare you down from the ballot, when you know it will mean higher taxes and fewer privileges.

The cavalry is not coming, and yet I see you and can’t help but hope.

[This article was first posted on Linkedin and Poets & Quants]

“Go and Date as Much as You Can!” or: How Two IESE Zugvögl Conquered Rotterdam

Introducing IESE Beyond the Bio, a student-run podcast 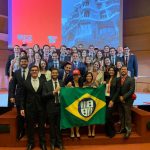 Trust the Process: How Coaching helped me in my MBA