The latest report of the Intergovernmental Panel on Climate Change (IPCC) expresses near certainty of the anthropomorphic origins of global warming and shows increasing concern over the long-term consequences of the continuous rise in CO2-emissions.

A warming planet has long been a serious policy concern in the European Union, but seems to have had little influence on policy in the United States. European policy has favored tax-exceptions and subsidies for all sorts of renewable energy while Americans continue driving their gas-guzzling SUV. Surely, the difference in policy, coupled with a more serious economic downturn in Europe, would imply that CO2-emissions are falling more rapidly on the “green” side of the Atlantic. Well, not so, it turns out. US emissions of CO2 in 2012 are projected to be 14 per cent lower than their peak in 2007 (U.S. Energy Information Administration), compared with 12 per cent in the United Kingdom.

Germany’s CO2 emissions have increased the past two years and the French have decreased by 10 percent from 2006 to 2011 according to the U.S. Energy Information Administration. If the Europeans are much more concerned about global warming why are the Americans able to match or best the Europeans in terms of progress on CO2 emissions?

The answer is simple: shale gas. This natural gas found in the shale sands covering large parts of the United States and Canada was inaccessible until just a few years ago. Since then, enormous technology investments have made extraction possible. Now shale gas is becoming an increasingly important source of energy replacing both imported oil and emission-intensive coal.

So how can it be that the intentional energy policies of the European Union seem to have mattered less than a switch from one “dirty” energy source to another? Well, it is a matter of pure arithmetic: It is not just a matter of how clean alternative energy is, it is also a matter of how much coal it replaces. Shale gas still emits CO2 (around half of that of coal), but it has replaced far more coal in energy consumption than renewable energy, and its overall impact is therefore greater. David Victor, and energy expert at University of California, San Diego estimates that the reduction in CO2 emissions from the use of Shale gas is around 500 tons of CO2 a year, twice that of the Kyoto protocol in the rest of the world (NPR interview).

Renewable energy and shale gas are not competitors

Shale gas deposits exist all over the world, including in the UK, continental Europe and much of Russia (see map below). With the technology now in place, policy makers around the world face the choice of whether to allow for the exploitation of these deposits. Though Russia will no doubt jump on the opportunity, policy makers across Europe are bowing to public pressure and seem reluctant to join the American shale-gas adventure. 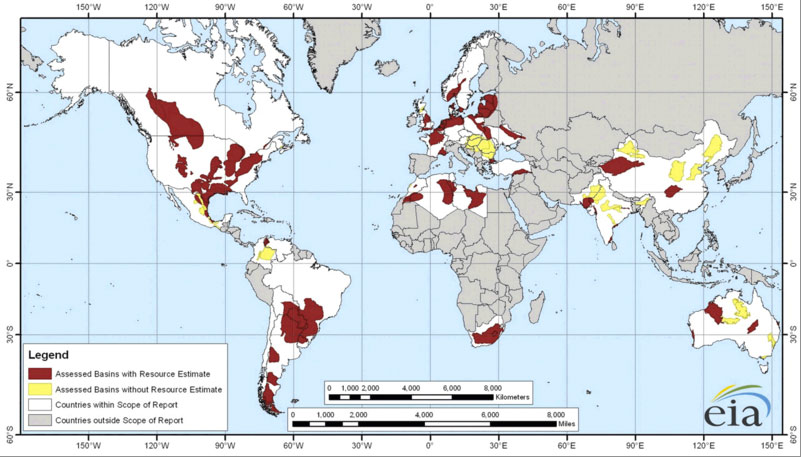 That would be a mistake. The important thing to recognize is that preventing global warming must be a two-pronged approach: First, it is certainly important to ensure that we will have access to cheap and emission-free energy sources in the future, but it is equally important to minimize emissions until then. This means that renewable energy and shale gas are not competitors, but can complement one another. Sun and wind energy might eventually provide a permanent solution to global warming, but they cannot presently make a significant dent in CO2 emissions.

This contrasts with shale gas, which cannot provide a permanent solution to global warming, but might significantly reduce emissions until we have such a permanent solution. European politicians must understand that relying on renewable energy for all of our energy needs will continue to be a fairytale for decades to come and we must do all we can to keep the really dirty coal in the ground.

So how do we ensure that cheaper energy will not crowd out investments in renewable energy? Policies must include increasingly higher taxes on carbon-emissions and continued government support for research in alternative forms of energy. Such will further decrease the attractiveness of coal and will continue to provide an incentive for the development of new forms of energy.

Only by the honest examination of all options can we ensure that one day we will rely solely on renewable energy, but also that our planet will not have been fried by then.

Morten Graugaard Olsen is an assistant professor in the Department of Economics. He earned his Ph.D. and M.A. in economics at Harvard University and holds an undergraduate degree in economics from the University of Copenhagen. His areas of specialization include international economics, banking, contract theory, growth theory.

One thought on “Shale Gas to the Rescue?”