Janet Yellen, chair of the Board of Governors of the US Federal Reserve, gave a speech in October 2014 in which she said that, “The past several decades have seen the most sustained rise in inequality since the 19th century after more than 40 years of narrowing inequality following the Great Depression. I think it is appropriate to ask whether this trend is compatible with the values rooted in our nation’s history, among them the high value Americans have traditionally placed on equality of opportunity .”

A lot of attention has focused on the fact that, particularly in the US, the richest 10 percent, and even more so the richest 1 percent, have increased their share of income  while average salaries have stagnated.

Figure 1 below displays the changes in the Gini coefficient, an inequality indicator with a scale of 0 (no inequality) to 1 (maximum inequality), for OECD countries. Figure 2 shows the Gini index for disposable income and the wide differences between several countries. 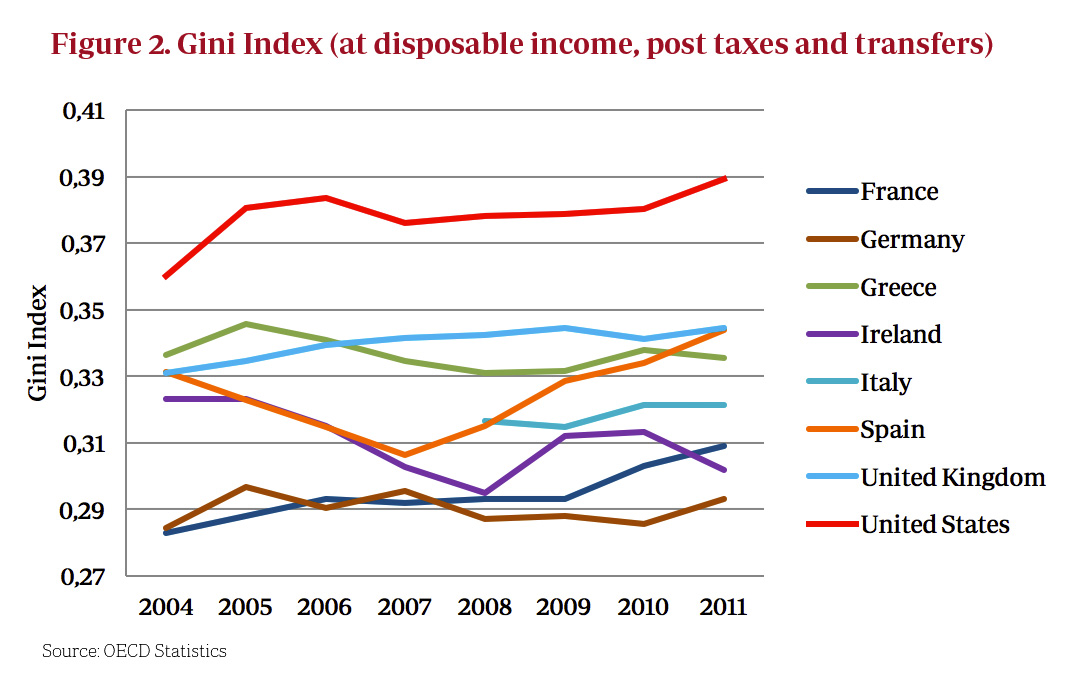 The Causes of Inequality

The roots of inequality are complex. One explanation for the increased share of the top 1 percent is that managers influence boards and assign themselves high salaries, though this view is at odds with the high remuneration received by managers in firms closely controlled by the owner.

Furthermore, globalization and digital technology expand the market for talent, giving rise to the “superstar” phenomenon. The value of a top soccer player is much higher today thanks to digital global media, than it was in a world dominated by national TV, or going further back in time, in a world with no TV.

The evolution of family structure may play a role. At one extreme, there has been an increase in the numbers of couples in which both partners are high earners, resulting in children who are bound to be high earners, due to their advantages in family background and education. At the other extreme, the growing number of single-parent families has increased the risk of poverty.

Policy interventions may also have an impact on the evolution of inequality. In the US, relevant factors include the lowering of marginal tax rates during the Reagan era and efforts to provide credit to the middle classes during the Clinton era, in order to foster consumption with stagnating salaries.

Inequality may corrupt and endanger democracy. In the US in the late 19th century, large concentrations of power brought about by the formation of large firms was viewed as a menace. In fact, an early driver of antitrust regulation was to prevent these concentrations of power. The danger is a government captured by the interests of a segment of society.

Policy should have clear goals and a social welfare function, focusing on the redistributive aims society wishes to accomplish. For example, do we want equality of opportunity or outcome?

The OECD recommends that countries promote employment and good quality jobs, greater participation of women in the workforce, improve education and skill acquisition over the working life, and optimally design the tax-benefit redistribution system. In her speech, Yellen emphasized four specific building blocks for improving equality of economic opportunity in the US: resources for children, affordable higher education, business ownership and inheritance. Food for thought.

Xavier Vives is professor of Economics and Finance, Abertis Chair of Regulation, Competition and Public Policy, and academic director of the Public-Private Research Center at IESE Business School. He holds a Ph.D. in Economics from UC Berkeley. He is Research Fellow of CESifo, and was member of its European Economic Advisory Group from 2001 to 2011. Research Fellow of the Center for Economic Policy Research, where he served as Director of the Industrial Organization Program in 1991-1997. Fellow of the Econometric Society since 1992 and elected member of its Council in 2006-2008; of the European Economic Association since 2004 and elected member of its Council 1991-1995; and Research Associate of the European Corporate Governance Institute. He is a member of the Advisory Board for Economic Recovery of the Government of Catalonia and in 2011 he was appointed Special Advisor to the Vicepresident of the European Commission and Commissioner for Competition, Mr Joaquín Almunia.

One thought on “Why inequality is increasing and what can we do about it?”