*This article was originally published by Poets & Quants and is part of the MBA Class of 2017 series we will be posting. You can read it by clicking here.

Employers and Job Titles Since Graduation:

Recalling your own experience, what advice do you have for applicants who are preparing for either the GMAT or the GRE? I simply bought the ManhattenPrep Books and then I was very consistent in doing one hour of preparation per day for almost half a year in the run up to the GMAT. Also, it helped a lot when I actually booked the GMAT test appointment, because this way I had a definite deadline to work up to and have completed all the preparation.

Based on your own selection process, what advice do you have for applicants who are trying to draw up a list of target schools to which to apply? First I looked at the different rankings and chose from the top schools. Second I picked a location, which for me contained both a place where I would like to be for the next two years as well as where I think it makes sense for getting a job later. As a European, I therefore thought Europe makes a lot of sense. Also I exclusively looked at two year programs. As I am quite young, I am under no time pressure to finish the MBA in one year and I think you are much better able to take up and develop what a business school is trying to teach you in two years rather than in a nine-month program.

What advice do you have for applicants in actually applying to a school, writing essays, doing admission interviews, and getting recommenders to write letters on your behalf? If there are any events held by a business school that you are interested in your area, go to the events, get to know the school, the admissions team, and what kind of people they are looking for. You will get a feeling if you truly fit their profile and also if the school is really the right place you want to go. It takes out a lot of stress for interviews and gives you some ideas of what to write for the essays.

What led you to choose this program for your full-time MBA? As I have said, I was only interested in a two year program, as I am still quite young and do not have any time pressure to finish my MBA. I think you can take in what the business school is trying to teach you much better as well as create a much stronger network with peers in your year and the year before and after you.

What would you ultimately like to achieve before you graduate? I would like to already have started working on my own company during the summer break and have it started off before I graduate. 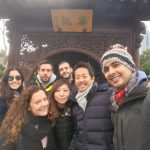