Does the current economic policy in Spain help or impede the recovery and medium and long-run growth prospects? Together with a group of eight IESE experts and six of some of the most prominent Spanish economists, we have developed the Reform Monitor, an assessment of the performance of the Spanish economy; the adequacy of the policy goals set by the Spanish Government; and the progress currently achieved by the reform agenda that has been finally adopted.

In almost any dimension one looks at, the Spanish Government reformism is not delivering , with the failure being particularly acute in terms of progress in the implementation of reforms (3.5 out of 10). Indeed, only 2 out of the 18 policy subareas we have assessed (pension reform and recapitalization of the financial system) get a pass grade while in 8 of the 18 the progress is assessed to be below 3, with particularly low scores in active labour market policies (1.8) and R&D promotion (1.9).


In order to obtain these indicators, we have quantitatively evaluated three dimensions for six broad economic policy areas: growth and competitiveness, competition and regulation, labour market, financial system, fiscal policy and the Public Administration, and welfare state. These six areas, regarding policy goals and progress, are in turn further developed in 18 policy subareas. This is the first set of results (click on the table to enlarge): 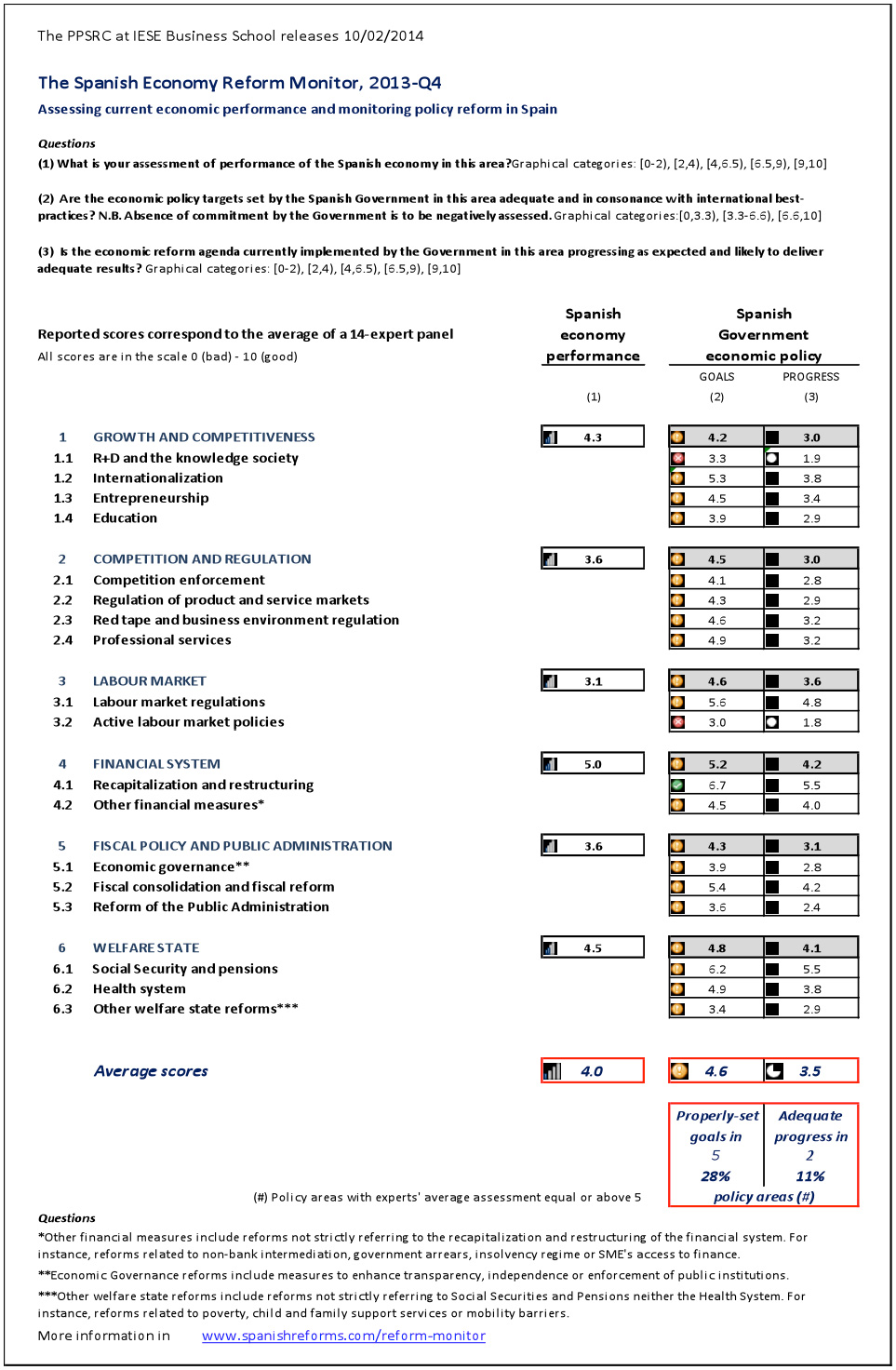 In the area of competition and regulation several pieces of legislation have been passed by the Spanish parliament in 2013: the law merging the sector regulators with the competition commission (forming the new CNMC), the law on the single Spanish market, adjustments in payments in the electricity sector, and there is also a project of law to reform the regulation of professional services. The issues underlying several of these laws have been pointed repeatedly by international institutions such as the IMF, the OECD and the European Commission (EC): regulators should be truly independent and effective, obstacles to trade, entry and exit of firms should be removed, competition should be introduced and barriers also removed in professional services, and the huge tariff deficit in the electricity sector eliminated.

Unfortunately the enacted changes seem either not sufficient, lacking ambition, or even misdirected . The very EC expressed doubts about powers of regulators being devolved to the government and the guarantees of independence of the new super-regulator.

Given that the experts have set their scores independently and that there is a strong convergence in these low scores across the panel, both in terms of goals and progress towards those goals, it seems fair to conclude that the reform program in Spain is not ambitious enough . Action is particularly urgent in active labor market policies and in R&D and the knowledge economy. Those two areas are only examples of a more general claim for reform in matters as important as education and the public administration. The public deficit will not be fully under control until the Public Administration and the tax system are reformed. Failure to act on these fronts will increase the likelihood of long-term stagnation.

This is the central concern of the project SpanishReforms, an academic, non-governmental website that offers regular and updated insights about the progress of the economic reforms adopted by the Spanish Government and reviews the analysis of the Spanish economy undertaken by the major international institutions.

Xavier Vives is professor of Economics and Finance, Abertis Chair of Regulation, Competition and Public Policy, and academic director of the Public-Private Research Center at IESE Business School. He holds a Ph.D. in Economics from UC Berkeley. He is Research Fellow of CESifo, and was member of its European Economic Advisory Group from 2001 to 2011. Research Fellow of the Center for Economic Policy Research, where he served as Director of the Industrial Organization Program in 1991-1997. Fellow of the Econometric Society since 1992 and elected member of its Council in 2006-2008; of the European Economic Association since 2004 and elected member of its Council 1991-1995; and Research Associate of the European Corporate Governance Institute. He is a member of the Advisory Board for Economic Recovery of the Government of Catalonia and in 2011 he was appointed Special Advisor to the Vicepresident of the European Commission and Commissioner for Competition, Mr Joaquín Almunia.