As I ventured into Nigeria and Kenya, the locals warned me: “don’t think all of Africa is like us.” In fact, the number one lesson to learn about Africa is that it is not “one” place: even neighboring countries are distant.  This has important implications for companies doing business in Africa and expanding in the continent: whether traditional multinationals, emerging market multinationals (EMMs), Pan-African companies, and even African regional companies.

What does country distance mean? In his CAGE model, my colleague at IESE Pankaj Ghemawat considers four types of distance: Cultural, Administrative, Geographic, and Economic. Here, I’ll focus on cultural distance, and I will deal with the other dimensions at a later time.

The Hofstede Center scores countries on a number of cultural dimensions. They provide information on 15 sub-Saharan countries (see figure below).

Some snapshots showing the differences in these countries (score range is 1-100. I include information on the US, China, and Spain for reference):

Some observations about these SSA countries, at the risk of playing down their diversity:

Let’s take a closer look at what masculinity means:

And let’s look at masculinity for SSA countries grouped by region: 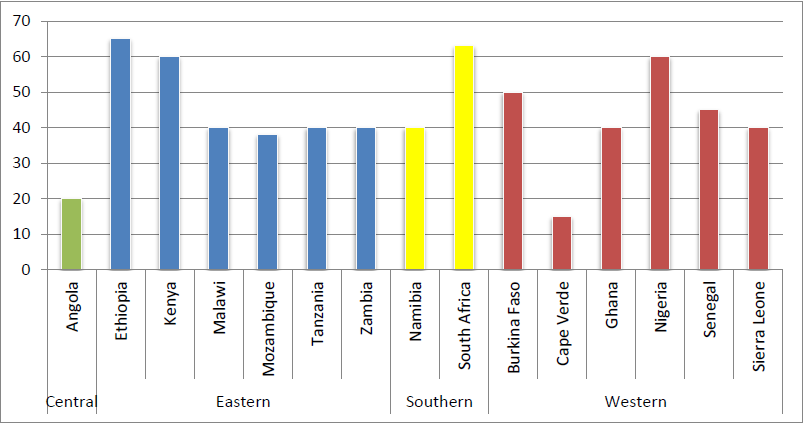 Any thoughts on the implications for companies expanding in Africa?

– Power distance: extent to which the less powerful members of institutions and organizations within a country expect and accept that power is distributed unequally;
– Individualism: degree of interdependence a society maintains among its members;
– Masculinity: extent to which a society is driven by competition, achievement and success, with success being defined by the winner / best in field;
–Uncertainty avoidance: extent to which the members of a culture feel threatened by ambiguous or unknown situations and have created beliefs and institutions that try to avoid these;
–Long-term orientation: extent to which a society maintains some links with its own past while dealing with the challenges of the present and future (high score = long term orientation = pragmatic society; low score = short term orientation = normative society).
–Indulgence: extent to which people try to control their desires and impulses (high score = weak control = indulgence; low score = high control = restraint).

7 thoughts on “Even Neighboring Countries are Distant”