I haven’t had the opportunity to travel by train in Africa. I guess that would be quite an experience! Most likely, an interesting combination of beauty, excitement, and cultural experience. One of the flagship projects of Agenda 2063 is the creation of an integrated high-speed train network that connects all African capitals and commercial centers in the continent. Such a network will facilitate movement of goods, people, and services.

What’s the current situation of railroad transport in sub-Saharan Africa? Let’s have a look at some data: 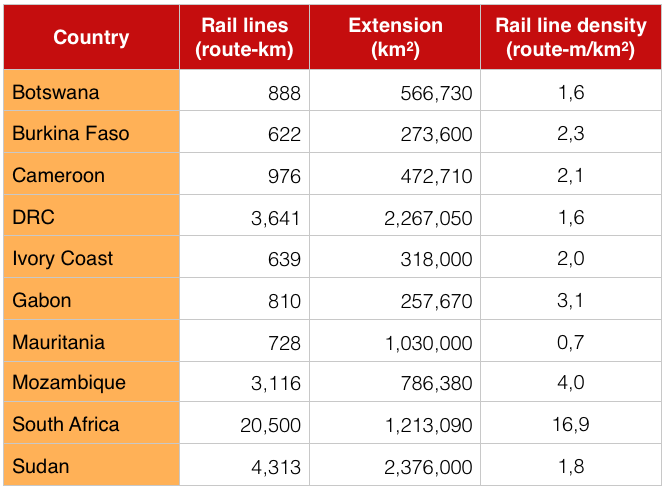 The information above is taken from data provided by the World Bank which are incomplete. For instance, Kenya’s railway system was built during colonial times. Nowadays, there’s a project to build a line to connect East African countries. None of this is included in the official statistics of the World Bank.

Not unexpectedly, South Africa stands out. It also stands out in terms of perceived quality of its railroad transport, according to the Global Enabling Trade Report 2014. Its famous high-speed Gautrain is a 80-km route for mass transportation in Johannesburg’s vicinity. I’ve used it as very safe transportation to the airport.

Still a long way to go to reach the goal to connect all capitals and commercial centers by high-speed train. But one step after another. As in many other areas, maybe Africa has the opportunity to leapfrog in rail transportation and jump directly to high-speed trains . Hopefully, this will contribute boosting economic activity in ways that don’t leave behind the underprivileged. Quite the contrary, by improving the movement of goods, I hope these investments will result in an increased integration for all.