Early this year, I wrote a post titled “‘Africa Rising’ – Under question?” The report McKinsey released last month “Lions on the move II: Realizing the potential of Africa’s economies” has brought the discussion back to the forefront: Africa is rising – no question about it. But Africa is not one country, one economy, one market: it’s 54 of them (or 53 if one doesn’t consider South Sudan – as McKinsey doesn’t).

Which are the countries rising in Africa? McKinsey includes in their report 30 countries accounting for 96 % of the continent’s 2015 GDP, and 87 % of the total population. 10 of these are classified as “stable growers.” This means that: (1) their real GDP growth rate is higher than the global average at 2.9 %, and (2) their stability is above the median in the MGI’s African Stability Index.

I thought it might be interesting to get some more information about the stable growers, so I did some search: 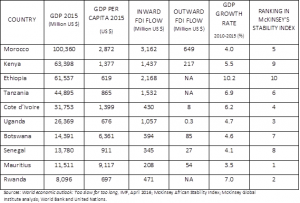 7 thoughts on “Africa rising: no question!”