Last week, from October 15 to 21, Barcelona’s City Council organized the first “Open City Biennial of Thought” (“Ciutat Oberta Biennal de pensament”), with the aim to “link the debate on the role of today’s cities with the big challenges facing contemporary society.” More than 20,000 people participated in 69 activities, including talks, debates and conferences in topics ranging from inequality, gentrification and exclusion, to innovation and creativity. As part of the Biennial, a CIDOB Breakfast with Sergio Fajardo, former Mayor of Medellín (2004-2007) was organized.

Here at IESE Cities in Motion we are developing a case study on the transformation of the city of Medellín, whose provisional title is Medellín’s Transformation: Toward a More Equitable, Innovative and Participatory Urban Society (Ricart, Berrone, Duch). The city of Medellín, Colombia, is often considered a success story and an international benchmark for urban transformation and social innovation. Once considered the “Murder Capital of the World”, by the end of last century, the Colombian city had very high levels of poverty, inequality and social exclusion. However, in only two decades, Medellín has managed to transform itself into a safer, more inclusive and prosperous place that receives international attention and recognition, such as being named “the world’s most innovative city” in 2012 or winning the prestigious Lee Kuan Yew World City Prize in 2016, for its sustainable urban design.

Key ingredients for the city’s transformation

By the late 1990s and the beginning of 2000s, some early signs of transformation emerged in the city, such as the opening of Metro de Medellín in 1995 – the first and only subway network in Colombia. However, many people consider the election of Sergio Fajardo in 2003 as the tipping point for the city’s real transformation. During last week’s debate in Barcelona, Fajardo highlighted some of the elements that were key in achieving such transformation.

Actions and initiatives to enhance connectivity, both from the point of view of physical connectivity and by giving excluded people competences, have been critical to reduce poverty and inequality and increase social inclusion.

First, in terms of physical connectivity, urban projects such as the Medellín Metrocable – the world’s first cable car system for public transport designed to integrate the city’s low-income residents living in the poorest neighborhoods, which clung to the valley’s sides, with Medellín’s wealthier commercial center -; or the San Javier outdoor escalators – public outdoor escalators built to connect one of the poorest and most violent neighborhoods on steep hills to the city center -, are probably two of the most well-known examples of Medellín’s urban transformations.

With these simple innovative transformations of the urban public space, it was possible to break down the isolation of some of the poorest areas and enhance equity and justice at the same time.

Additionally, giving people competences and skills to be able to reduce social and economic gaps has been essential in the city’s makeover. The idea that education drives change and that it can be a powerful tool for reducing inequalities has been at the core of Fajardo’s administration policies, both as Mayor of Medellín and as Governor of Antioquia. Programs such as “Medellín, la más educada” (“Medellín, the most educated”), a public program started during Fajardo’s administration (2004-2007) and continued by his successor, Mayor Alonso Salazar (2008-2011), aimed at the use of education – especially early childhood and primary education – as a means to reduce poverty and inequality and to fully harness the potential of people and communities. 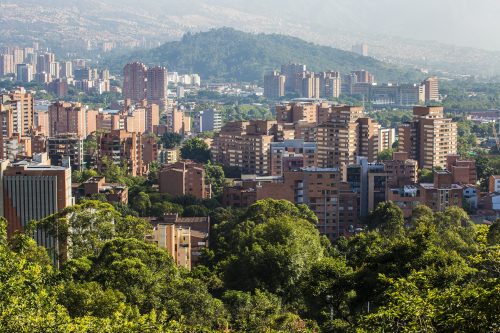 Medellín has become an inspiration for urban transformation around the world, especially for cities in developing countries with high levels of inequality and exclusion. The city has succeed in increasing social, economic and territorial inclusion by, among others, focusing on the improvement of public spaces, enhancing physical connectivity, and expanding education. Most certainly, the city still faces important challenges in terms of poverty, inequality and social inclusion. Nonetheless, Medellín’s remarkable progress also offers a positive example of urban transformation with social innovation at the heart of its change.

Have you ever been to Medellín? Let us know your thoughts on the comments section below!

8 thoughts on “Medellín: A Story of Transformation”