Luis reflects on his experience at the Zurich Barcelona Marathon and the important life lesson he learned: COMPETE LESS. ENCOURAGE MORE

It’s been some days since the Sunday I participated in the Barcelona Marathon sponsored by Zurich Insurance and I have finally had a chance to reflect on my performance in the race. I am a firm believer that there are many life lessons in running marathons. From this race, the lesson I would like to share with you is COMPETE LESS. ENCOURAGE MORE.

The story is the following: I arrive to the starting line of the Marathon with plenty of time, hydrated, and prepared physically and mentally for the 42.2 km run. People were nervous and so was I. But I had no one to share it with at the start line as my friends Jorge and Juan would accompany me in KM 4 and 10 respectively.

The race started punctually and I ran the first kilometers without a fix pace. First warning sign. Adrenaline can be a dangerous partner.

After four kilometers of running with house beats pumping in my ear, I met my friend Jorge. He ran with me during six km until Juan took over. Thanks Jorge for pacing me! When I met Juan at km 10 my legs were feeling heavy. Second warning sign. In theory, after 10 km you should feel as if you have not run much.

Juan set a fix pace of 4 min, 10 sec per km. Thanks Juan for pacing me! We passed the half marathon mark in 1 hour, 28 min. I was feeling my legs pretty tired but nothing to worry too much about. However, three weeks earlier I ran 30 km at a much faster pace and felt better. Third warning sign.

By km 30 my body was generally tired, but there were only 12 km left. We were on schedule to beat the 3 hours goal and even improve it by several minutes.

At km 32 I started to have a pain in the stomach, similar to a stitch. However, the usual technique of pressing didn’t work. The race got very complicated very quickly. Fourth warning sign.

For the first time, Juan warned me that we were running slower than we should. Fifth warning sign. I ran 2 km completely bent forward. It was unbearable! I couldn’t run any more! After months of hard work, that was the last thing I would have suspected could ruin the race.

At km 35 I decided to stop. I walked for about 20 minutes until I saw the bright faces of my family cheering me on. “Go daddy, you can do it!” cheered my daughter and wife. I started to run again and finished the Barcelona Marathon exactly how I started…..RUNNING!!

Now, I wonder. Could I have coped with that pain running until the end­? Should I have followed any other strategy? Perhaps I trained too much the last week as a result of anxiety? Who knows….the most important thing is that I did not give up!

Thinking about this race, it reminds me of my journey in the IESE MBA and the contagious culture there of collaboration. In order to win at life, you will need the help others. You will need friends like Jorge and Juan to join you in various parts of your MBA and life journey – not necessarily starting/finishing with you but encouraging you along the way. So as you approach your next life challenge, I implore you to COMPETE LESS. ENCOURAGE MORE! The best successes are won as a team! 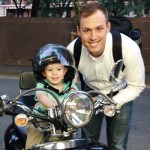 An investment with guaranteed returns

Every month can be Movember if you want it to be!