Led by Shilpika Gautam (IESE MBA 2010), GangesSUP is the world’s first descent of the entire length of the river Ganges by stand up paddleboard. An expedition for purpose, the vision and mission of this journey is to empower awareness and advocacy for cleaner water, via adventure.

Shilpika Gautam (IESE MBA 2010) and the team kicked off their expedition on foot on 3 October 2016 in Gaumukh, the ‘visible’ source of the Ganges at the altitude of 4100m in the Indian Himalayas. On 11 January 2017, 101 days and 2977 km later, the team paddled to their destination at the mouth of the Ganges at Gangar Sagar. The expedition also marks a world record: Shilpika broke the world record for the longest continuous stand up paddle boarded distance by a female in onee journey, source to sea. The former Guinness world record was 2231 km while Shilpika covered well over 2500 km! In this blog post, Shilpika explains her motivation to take on this personal challenge and recounts her experience leading up to her unique achievement.

Let me start by telling you about my background. I was born in India and grew up there but first my consulting career, then the MBA and most recently my time in investment banking took me away from the motherland for almost a decade. While these were absolutely life changing, formative and super fun years, the longer I spent away from India, the less connected I felt to the people, the culture but more importantly to the challenges and opportunities in the country. For the past few years I felt a growing desire to not just change something in my own life but also to go back to India to explore the possibility of using my skills to create some impact.
There are various ways to do this. For me, I figured I would take the route less traveled (or paddled in this case) as I was inspired by the adventure community in the UK. I decided that I first wanted to see my country through an intense, immersive (pun intended), adventurous route – something that had never been done before – but also embark on an adventure for a purpose. Physically, I wanted to push my limits and emotionally, I wanted to understand and document some of the major problems that India faces through my own experiences.

I had picked up the sport of stand up paddling (SUP) in London and I knew that the challenges around access to cleaner water are not just critical for the environment globally but for the very development of a country like India. I am not the best paddler out there, nor am I an expert on water and empowerment issues but I thought it made sense to combine the two. Thus was born the idea of stand up paddling the Ganges. Not only does the river support a twelfth of the world’s population, it also represents the dichotomy that a river that hundreds of millions worship as their mother is also among the most polluted in the world. The Ganges is also a rather ‘visible’ and ‘known’ symbol for the challenges that our rivers and oceans are facing globally, be it untreated sewage, single use plastic or mismanagement of water resources.

With this in mind, I started working a plan for this project, GangesSUP. I came up with four primary objectives:
• To use the SUP sport to highlight the positive stories from the river-of-life that are authentic, relevant and engaging for the Indian and the global audience.
• To understand the lives of those who are the most affected by the condition of the river and the different community projects that are ongoing to address the accelerated, pollution-led death of the Ganges. In particular, I wanted to raise awareness against single use plastic and the dumping of untreated sewage disposal into the river.
• To challenge stereotypes of what women are able to achieve and do, especially in an Indian context and to create more visibility for women in public spaces.
• To leave a positive, sustainable legacy that outlives the duration of the adventure itself. I wanted to work with local partners and governance bodies to promote the importance of cleaner water as the means for health and well-being. I also wanted to encourage more people to step outside their comfort zone and attempt an ‘adventure in their backyard’ and to mobilize young people’s engagement in civic issues via adventure. Finally this was a great way to showcase the immense accessibility of the SUP sport (the fastest growing water sports in the world!) and create additional eco-tourism opportunities in India’s great outdoors. 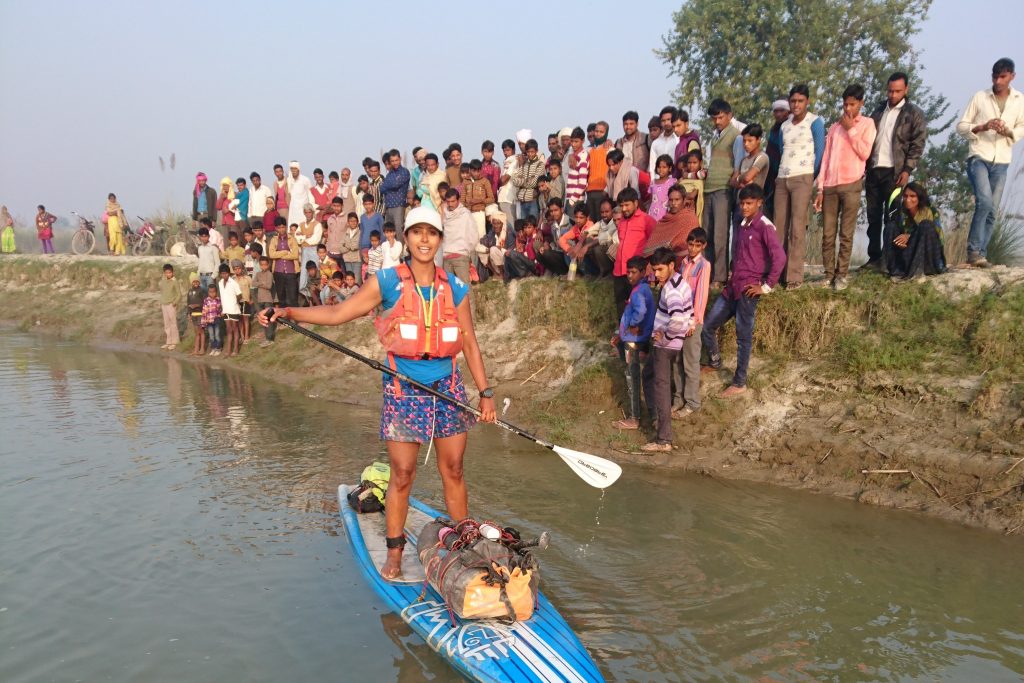 After establishing my goals, the preparation began! Leading up to the adventure, there was a lot of work to be done. There were multiple aspects to the planning and preparation –
• Physical: I have always been an active person so I wasn’t particularly daunted by the endurance demands of a long and continuous expedition like this one. The human body is amazing and it adapts, I continued to do cross training in the gym and got out on the board in London on the river Thames and on the canal whenever possible
• Team: It would be great to have some company so I had to find people who shared my vision.
• Funding + Sponsorship: The expedition was completely self-funded. In order to extend my runway I gave up my lease in London, put most of my stuff in storage and lived out of a suitcase for the best part of 2016 (short term rentals, friends’ spare rooms, couches etc). As I got closer to expedition launch, I decided on a crowdfunding campaign to raise money for our support vehicle and also the documentary we hope to release post expedition. The most capital intensive part though was always the gear. We had a variety of terrain, temperatures and river conditions to cover – from trekking above 4000 metres to traversing white waters to touring and finally the open ocean. I created a dream list of sponsors that consisted of the best and environmentally conscious names in the water sports world. I believe that if you don’t ask, you don’t get. So I made some cold calls and I have to admit that this is when my time on the trading floor and sales came in handy. With some luck and persistence, the majority of the expedition equipment was either donated or provided to us at discounted rates and we managed to build a global sponsors network.
• Logistics: Planning an expedition from afar is never easy, especially in India, where the adventure industry is still in its nascent stages. We had to figure out everything on on our own, from maps, to route planning to safety, to support to even getting our equipment in.
• Partners + Purpose: I chose to partner with WaterAid India, a non profit doing exemplary ground level work, be it constructing toilets, raising awareness regarding hygiene and sanitation and definitely the empowerment of women. A lot of expeditions focus on fundraising for their chosen charity but I wanted our journey to be more ‘engaged’ than that.
• Media: Our message would only be as effective as the number of people it could reach so it was quite important that we could share it widely and authentically. We had press coverage along the way and the story will be airing on Indian television as well (Discovery India). Ultimately I believe it’s not those who inhabit the banks of the Ganga, who can make a difference – it’s people like us who are in a position to make conscious choices.

Getting expedition ready was a bit like a start up and I approached it as such. I did not have any experience of expedition planning pre-GangesSUP so it did take about 5 months of almost full time dedication to get everything up and running. I really wanted the ‘purposeful’ bit to be an integral part of the experience, I cannot say that it was easy but now having finished, it was all worth it. We had a unique opportunity to really see and understand the challenges around cleaner water so as we paddled along the Ganga, we also visited WaterAid’s projects in various rural and urban settings along the way. Besides the association with WaterAid, we performed water testing along the river. This combined with regular conversations with villagers gave us a set of quantitative and qualitative insight into the relationship between the river and those who live closest to it. The 101 days I spent on the river are full of countless memories and way too many special moments. What will however remain with me forever is the love, kindness and generosity of the people we met along the way. Their curiosity, the warmth of their welcome and definitely their resilience in the face of daily adversities while leading a life devoid of basic rights is truly inspiring. 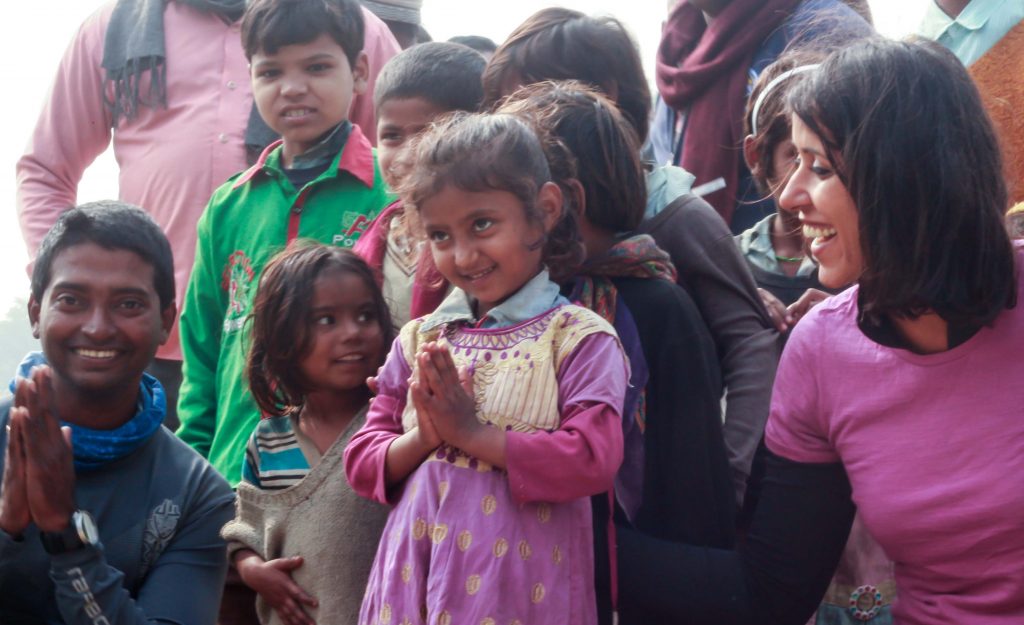 Shilpika receiving a warm welcome on her journey

This is bound to sound cliched but my IESE MBA was immensely valuable to me on this journey. My biggest ‘takeaway’ from the MBA was the people I met, international in their origin, global in their thinking and impact, entrepreneurial and creative in their ambition and consistent and loving in their friendships. While it is not a normal post-MBA route to do what I have done, I am incredibly lucky to have a support system of plenty of my IESE classmates who do not really live by the conventional definition of what is normal. It is these friends who have supported me throughout this journey and I am really really grateful. The MBA also helped inculcate an attitude where no project or idea seemed too wild. More importantly, it taught me how to  manage a team and succeed under trying conditions and uncertainty. I must also add that the ‘experiential’ and rather ‘disciplined’ nature of the MBA does leave one with a lifelong attitude of approaching and solving problems in a fairly structured manner. Especially when stuff starts to go wrong, as is inevitable in an expedition like this, this skill really helped me. Finally, I was lucky to have a fantastic bunch of IESE professors cheering me on throughout this adventure.

I would like to share some closing thoughts with anybody thinking about embarking on their own personal adventure. Everything that you have done or experienced personally and professionally will be a stepping stone to what you want to create next, so don’t let your own pre-conceived notions dissuade you from trying something new. It’s never quite too late to switch away from something that is not working for you. Invest time in making real connections with people, not because of what they can offer but because they are an inspiring, positive, energetic presence in your life. When attempting something new or seemingly unconventional, there will be times where you would feel lost or not in control. Just keep calm and keep making it up as you go, as long as you believe in your vision. It worked for me.

You can find out more about Shilpika’s amazing journey and her cause here. 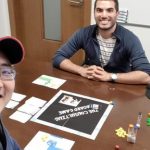 The Consulting Board Game 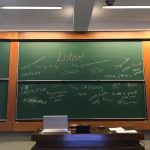 What I really learned at business school 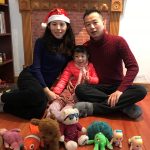