Today more than ever, cities require strategic planning. Only then can they consider pathways to innovation and prioritize what is most important for their future. For the fourth consecutive year, we are pleased to present a new edition of our IESE Cities in Motion Index (CIMI). Since its inception, the CIMI has empirically validated our conceptual model, which assesses the cities in relation to 10 key dimensions: economy, human capital, technology, the environment, international outreach, social cohesion, mobility and transportation, governance, urban planning, and public management.

Encouraged by the positive reception our index of cities has had in various forums linked to city management, we have decided to publish the CIMI for another year. As in previous editions, we have tried to provide an index that is objective, comprehensive, wide-ranging and guided by the criteria of conceptual relevance and statistical rigor. The 2017 edition of the CIMI includes 180 cities – 73 of them capitals – representing 80 countries. The breadth of the project establishes the CIMI as one of the city indexes with the most widespread geographical coverage available today.

The 2017 index reveals that there was good news for some of the world’s urban hubs: New York City (1), London (2) and Paris (3) rise victorious in the test of being cities ready to embrace the future. New York City (United States) is first in the overall ranking, driven by its performance in the dimensions of the economy (first place), technology (second place), human capital and public management (fourth place), international outreach and urban planning (fifth place), and governance (sixth place). However, it continues to be in very low positions in the dimensions of social cohesion (position 153) and environment (position 82). Indeed, if we look into the specifics of each dimension we can find other interesting stories. 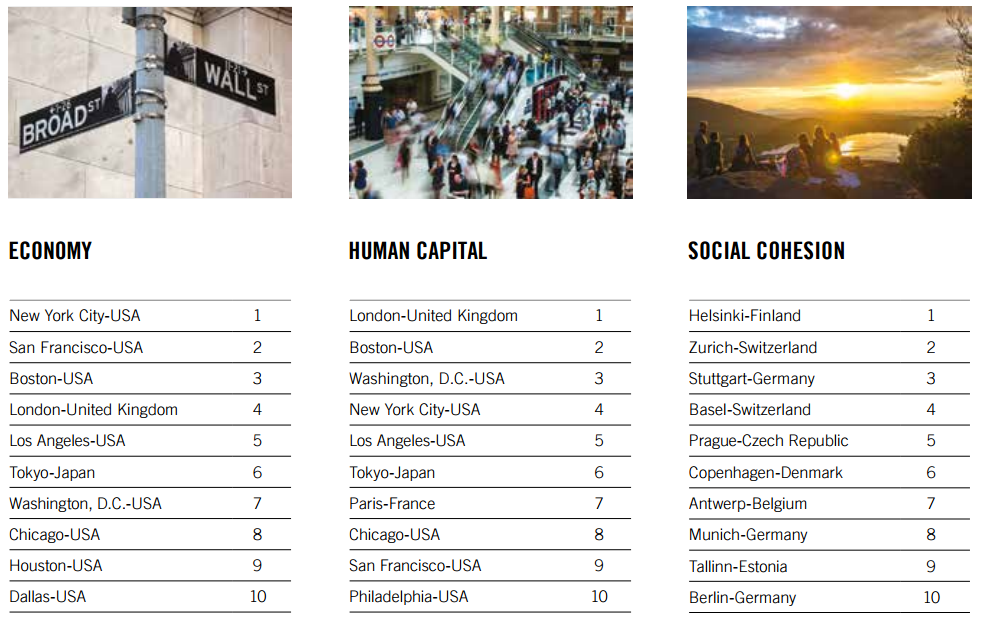 The city that heads the ranking in this dimension is New York City (United States). This city achieves relatively high levels in all indicators but it stands out especially for its high GDP and number of headquarters of publicly traded companies. It is important to mention that the top 10 for this dimension has eight U.S. cities.

The city that ranks first in this dimension is London (United Kingdom). This city stands out for being the one that has the most top-level business schools, as well as for being the one with the highest number of universities. Likewise, a high proportion of its population has secondary and higher education. Although the number one city is London, the top 10 ranking for this dimension has seven American cities.

Helsinki (Finland) is the city with the highest rating in this dimension. It is a city with a low unemployment rate, an equitable distribution of income and the highest percentage of women in government positions (more than 70%). It is worth noting that the top 10 cities in this ranking are European. 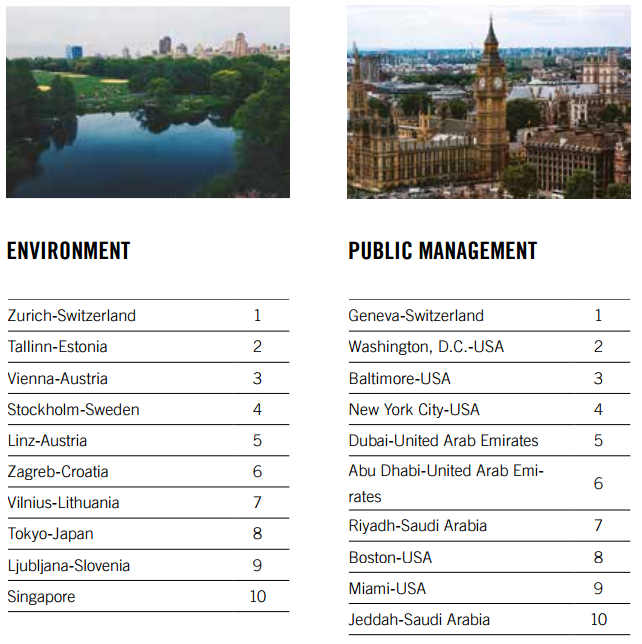 In this dimension, the cities that are best positioned are Zurich (Switzerland) and Tallinn (Estonia). These cities are in the top of the Environmental Performance Index (EPI) and have low levels of pollution and CO2 emissions. Eight of the cities in the top 10 for this dimension are European.

In this case, Geneva placed first, with good values in almost all the indicators, and it stands out especially for its low sales taxes and its reserves per capita. The top 10 for this dimension is made up of five U.S. cities and four Middle Eastern cities. 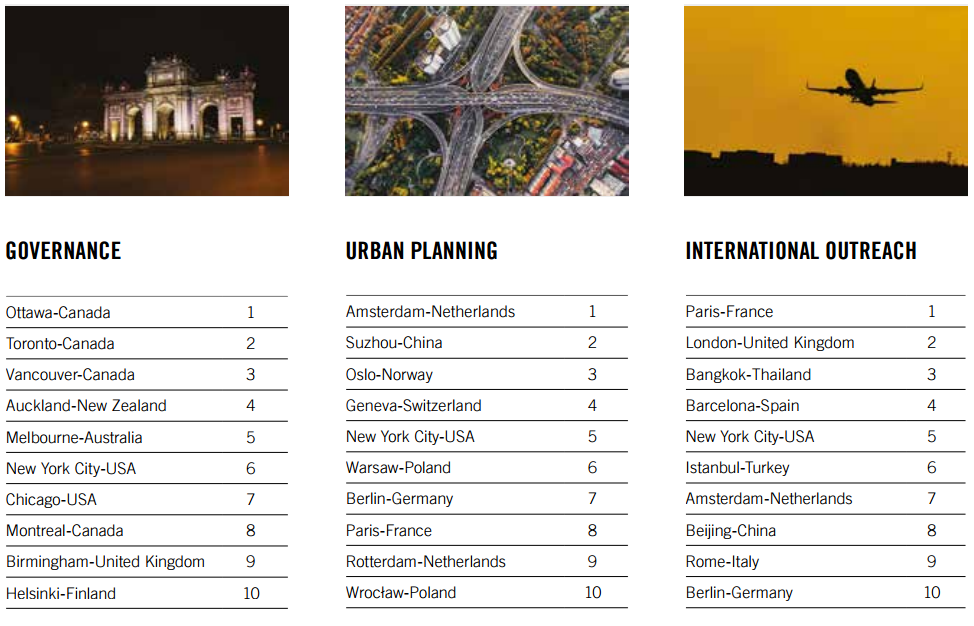 In this dimension, Ottawa (Canada) ranks first, standing out in the strength of legal rights index and the corruption perceptions index. Among the top 10 cities in this dimension’s ranking, there are four Canadian cities.

In this dimension, Amsterdam (Netherlands) ranks first and is among the highest-ranking in almost all the indicators. It stands out because almost 100% of the population has access to adequate sanitation facilities and because of its low number of people per household. It is important to mention that eight European cities are in the top 10 for this dimension.

Paris (France) is the top-ranking city for this dimension and London (United Kingdom) is in second place. This is because Paris is the city with the second-highest number of international tourists and ranks first in the ranking of cities by the number of photos taken in the city and uploaded to Panoramio. It is also the city where the most international conferences and meetings are organized. London, in turn, is the city that attracts a higher number of airline passengers, which is consistent with the fact that it is one of the cities with the largest number of air routes. Of the top 10 cities for this dimension, there are six European and two Asian cities. 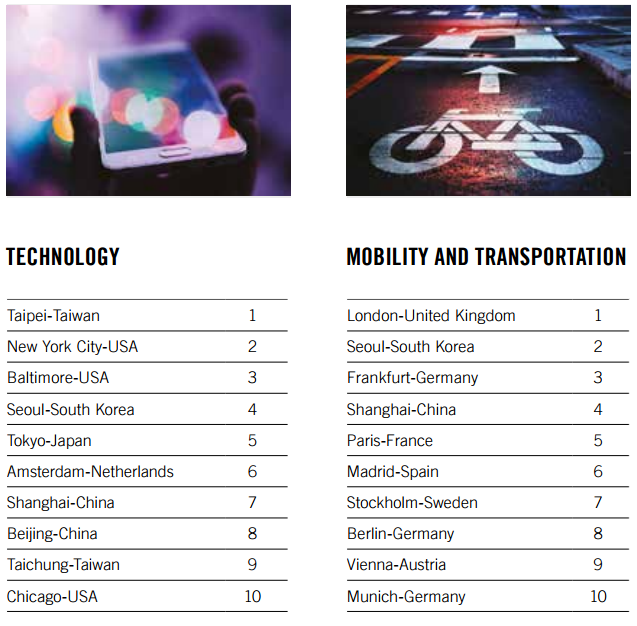 Taipei (Taiwan) is the city at the pinnacle of this ranking. This city achieves good levels in all the indicators and stands out especially for the percentage of broadband users in the city, the number of Facebook users per capita, and the number of mobile phones per capita. Of the cities that occupy the top 10 positions, there are six Asian cities and three U.S. cities.

The city of London (United Kingdom) comes first in the ranking and stands out in almost all the dimensions. Of the top 10 cities in the ranking for this dimension, there are eight European cities.

So what can be learned from the study? First, there is no single model for success so the city strategy has to be adapted to each situation. Secondly, the perfect city does not exist. Even those that are placed in the top ranks have weaknesses. The overarching goal should be to develop urban spaces where people can live and carry out their activities with the greatest opportunity and probabilities of success, within a liveable, creative and socially responsible environment. Cities should work towards creating more attractive places and generating healthier, happier and more prosperous lives for all citizens.

You can download the full report here: IESE Cities in Motion Index 2017.