Last week I had the opportunity to attend the Chicago Forum of Global Cities, an event organized by The Chicago Council on Global Affairs and the Financial Times. A fantastic occasion to visit again Chicago in the only time of the year when the weather can be just excellent, and it was so. A good occasion to visit my friends and above all a very interesting Forum. You can visit the forum virtually in their webpage and it is worth doing so.

The delegates (around 500 people) were a mix of local authorities from many different countries, companies with interests in cities, academics, and even students, with special invitations and events. IESE Cities in Motion was one of the international academic partners of the event. As partners I was able to participate in a very interesting expert workshop on Public Private Partnership. 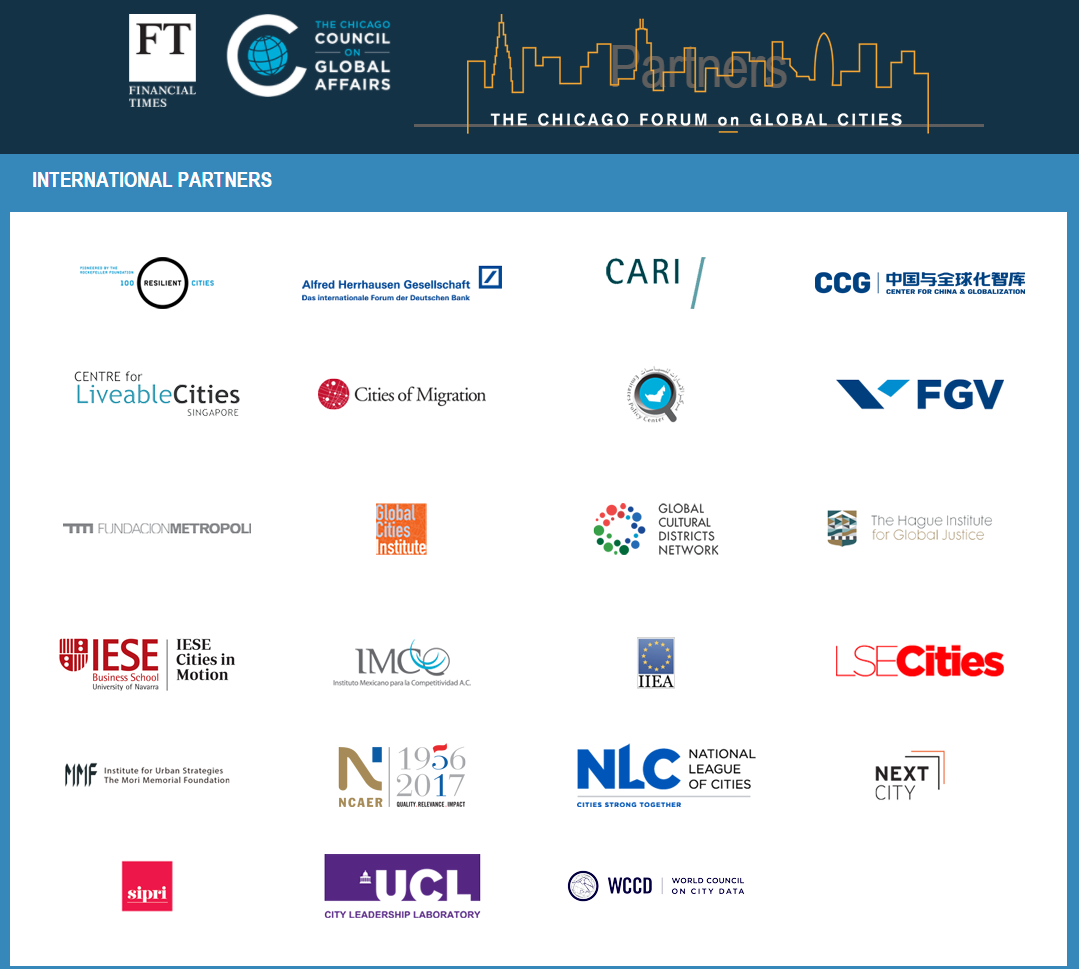 It is not the place to list all the insights from the different conversations and in fact it is much more interesting to put the time to see any of the panels the reader may have interest on, in streaming as indicated above. I would like to highlight only two ideas I think are important lessons from the event.

The opening panel used the standard data we all use to explain the rapid urbanization of the world and the tremendous impact of cities on the global issues that characterize the dominant trends on the XXI century, the century of cities as we call it. But in front of these great challenges, cities, the global cities present in the forum, showed their commitment to deal with these issues, to take the responsibility to face the global issues from their local position, asking state and federal governments to provide the resources and the political power to act. The fact that just the previous week President Trump made the decision to withdraw the US from the Paris agreement on Climate Change, almost 80 cities in US had already pledged their commitment to comply with the agreement in spite of the federal position. All delegates agreed that global cities around the world should take the leadership Nation States seem unable to take to deal with the global problems of climate change, resilience, poverty, refugees, and so on. Cities are ready and willing to lead, a real hope for the world.

Later on in the debates, and I believe with a lot of influence from Richard Florida (one of the speakers) latter book, there was a discussion on the backlash from the successes of the more advances cities. Cities that have been changing, getting more creative, attracting talent, creating prosperity,… are also shoving increasing inequalities, both inside the cities and with important problems of gentrification, and outside the cities where smaller more rural or industrial places are not sharing on the gains of globalization, and the consequence of all this is behind the growth of different populistic and nationalistic movements that try to stop the city global leadership shown above. Leaders in cities, in broad partnerships with citizens, private firms, and academic world… need to do a better job to communicate and share the great opportunities of global but inclusive growth. Together these two insights, global leaderships from cities and greater inclusion, conform a powerful agenda that can transform the world in the direction of reaching the UN Sustainable Goals.

It was impressive to see the degree of agreement in this ambitious goal with delegates from the five continents. But it was also sad to realize that our two big cities in Spain, Madrid and Barcelona, were not present in the forum and one wonders if their focus on inclusion (extremely important) is making them loose connection with their role as global cities. It is my belief that only dealing with global issues at local level we can transform the world for the good, obtain the gains of globalization, and distribute these gains with citizens and rest of influence area of each city. As mentioned, a very difficult agenda that requires a real partnership in each city with a global perspective. Are our cities ready to lead?