Today, we live longer and healthier lives than ever before. In 2017, 962 million people was aged 60 years or over, and this number is expected to more than double by 2050 and to more than triple by 2100. Additionally, more than half of the world’s population already lives in cities and it is forecast that the percentage of urban residents in the global population will increase to around 70% by 2050. These two mega-trends combined, rapid urbanization and population ageing, will bring some of the most important challenges and social transformations of the 21st century. 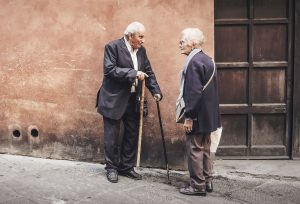 Are our cities well designed to provide well-being for people of all ages? How can local managers improve quality of life and services for all, including older populations? Can city leaders support and enhance social cohesion and inclusion for everyone?

As shown in our recently published book, Cities and Social Cohesion: Designing more inclusive urban areas, fostering social inclusion in large and highly diversified metropolises can be a complex task. In the case of ageing societies, as populations gets older, cities face numerous challenges in different areas, including health and social care, outdoor spaces, infrastructure, transport, housing, and social and civic participation. However, by putting citizens at the center of all policymaking and adapting cities to create more accessible and inclusive places for all, we can create urban areas that are good not only for senior citizens, but also for all-age city dwellers.

The role of cities

Transforming cities to become all-age-friendly places can take a long time. However, many city managers around the world are already taking positive steps and finding new ways to create more age-friendly and inclusive urban areas for all.

For instance, in order to mitigate social isolation of older citizens, the city of Barcelona launched in 2014 the Vincles project, an app-based platform designed to strengthen and expand the social ties of elderly people in the city, reduce loneliness and improve quality of life with the help of new technologies.

To encourage participation of older people in society, the City Council of Pozuelo de Alarcón, a municipality in the Community of Madrid in Spain, launched in 2016 the “Cuidamos Pozuelo” program. This initiative is based on a network of senior volunteers that observe the city’s environment, identify urban problems (such as sidewalks or road signs that need to be repaired) and reports them to the City Council so that the administration can improve public urban spaces. The project improves city environment, while actively promoting participation of the ageing population, resulting in a win-win scenario.

Lastly, in order to promote physical activity of ageing populations, many cities around the world have been developing outdoor gym facilities and playgrounds for senior citizens or creating programs to foster active and healthy living in old ages. For instance, the Japanese city of Yokohama, created the “Yokohama Walking Point Program”, a program designed to encourage senior residents to walk by using a system of rewards with the opportunity to win prizes. The final aim is to keep them fit and healthy.

As the global population ages and cities continue to grow, cities will need to adapt, transform and redesign infrastructure and services to create more accessible and all-age socially inclusive urban areas. The need of age-friendly urban design and services is critical.

How the city treats its elderly tells a lot about its character. Quality of life for older people will depend significantly on their ability to participate in urban life, and no city can ignore these issues.

Has your city launched any initiative or program aimed at improving senior living? Let us know in the comments!

5 thoughts on “Ageing in the City: Can Metropolises Contribute to Better Senior Living?”