Expatriation is a broad term referring to a whole range of work experiences abroad. However, at closer inspection there are many different forms and classifications of expatriation.

First of all, depending on the locus of the initiative, we can differentiate between self-initiated and company-initiated expatriation. A self-initiated foreign worker is defined as an individual who relocates voluntarily to a foreign country on his or her own initiative, i.e. independently of any employer and without organizational assistance, and is hired under a local, host-country contract (Crowley-Henry, 2007; Inkson et al., 1997). In contrast to people who manage their global careers themselves, an employee sent abroad on company initiative is called an assigned expat. Based on recent data self-initiated expatriates constitute a bigger proportion of the international workforce than company expatriates (e.g. 65% vs. 35% in Tharenou & Caulfield, 2010).

Expatriation can also be distinguished in terms of the assignment duration. The following assignment types tend to be emphasized: long-term (lasting for more than 1 year), short-term (less than 1 year), commuter (regular but very short-term transfers), extended business travel (less regular but also very short-term transfers, sometimes lasting only days) and one-way permanent moves. The 2010 Global Relocation Trends Survey indicates that long-term assignments are still the most frequently used type. However, other forms have become increasingly important too. 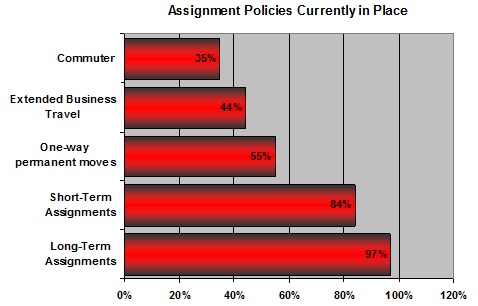 A final classification that is commonly used refers to the scope of the assignment, differentiating between developmental (and/or graduate), technical, strategic, functional, or virtual transfers.