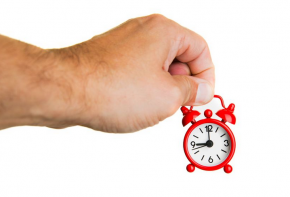 Have you ever been in a situation where you needed to buy a piece of clothing just for one single event or occasion, knowing that you would not use it much afterwards? If so, I bet you didn’t spend much time to pick it and much money to spend on it. Similarly, have you ever rented a flat or house, knowing that it is just a temporary solution and soon you will be moving into your own place? If so, I would also expect that you didn’t put a lot of effort into interior design of your temporary home. Finally, remembering college times, I believe many would agree that studying for the subjects that you never expected to return to and use for your future career was qualitatively quite poor, serving just the purpose of passing the test.

What is common about all the abovementioned examples is the temporary nature of these situations, lack of a long-term orientation, and, the resulting quality and quantity of behaviors associated with them. I am pretty sure that be it your everyday wardrobe, permanent home or a subject crucial for your future career, you would spend much more time and effort to make the results worth your standards. Why the difference? The answer probably lies in the difference between the underlying short- and long-term orientation in relation to these situations.

Expatriate assignments are also temporary in nature. Sooner or later every assignment comes to an end, and when relocating abroad expatriates are fully aware of that. Indeed, usually company initiated expatriates know exactly the time they are expected to expatriate for. So how might this short-termism influence expats’ performance? Could it be that being in the host country on a temporary basis makes expats less productive than they potentially could be? And is it possible that this issue is becoming even more critical given the trend towards shorter assignment forms?

According to Geert Hofstede’s dimensions of cultural values, a long-term orientation entails an expectation of rewards and returns for one’s efforts in the future rather than immediately, hence emphasizing long-term goals, perseverance in relation to them, and subordinating one’s own current interests for a higher purpose. In contrast, short-term orientation places a value on short-term returns and rewards, hence mainly acting in accordance with current needs rather than future outlooks.

If we put these ideas into the context of expats, we may draw some relevant parallels: If working towards the well-being and prosperity of the host organization would reflect a long-term orientation, then focusing on the successful delivery of assignment goals imply a short-term orientation. Ideally, the assignment goals should of course serve the larger purposes and long-term goals of the host organization, yet I would question if that is really the case for all different indicators of organizational performance.

For example, if we look at financial performance indicators then it is quite likely that expat managers would strive for quick profits which may be at odds with the wider corporate strategy and the objectives of corporate financial sustainability. The area of talent development might be even more concerning. Specifically, talent development is usually a long-term process, which is all about investing now, but receiving returns later. As such, out of my own experience being in the host organization on a temporary basis, expats often do not invest sufficient time in developing local talent – unless they are formally required to and evaluated on it – because they are unlikely to actually reap the long-term benefits of it.

To use another example, think about an important managerial behavior such as delegating. Delegating is a very powerful concept, as delegating tasks and responsibilities helps to develop subordinates while also freeing up time for oneself. Yet at the very beginning, it is always faster and easier to accomplish the tasks oneself rather than delegating it to subordinates, as inexperienced employees need a lot of coaching, support and monitoring. Therefore, delegating is usually practiced more with potential successors and based on long-term objectives. In case the focus is on the short-term, with a particular aim of getting the current task done, a manager would most probably follow a ‘do it yourself’ approach rather than delegating.

In the same vein but on a larger scale, expats may be hesitant towards developing local talent, because the process might not directly contribute to their short-term goals. Although understanding the importance of talent development for organizational sustainability, expats may shift the responsibility to their expat successors, or simply avoid it altogether due to a lack of involvement and long-term responsibility for the foreign unit. The implications for growing local talent in the foreign operations are tremendous.

All in all, a key question organizations and global mobility managers need to ask themselves is how to foster and sustain a long-term orientation in regards to host unit prosperity in the context of temporary expatriation and their short-term goals?

One thought on “The Short-Termism of Expatriates: Ideas and Implications”