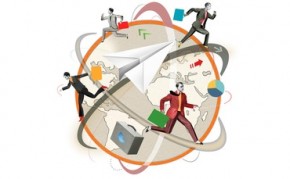 Today I would like to share with you one peculiar insight I recently became aware of when planning the forthcoming weeks in my calendar.

Specifically, I was invited to attend an event hosted by the Barcelona city council, which is meant specifically for expats in the area. The event is part of a campaign for expats called ‘I am Barcelonian’, and is scheduled for October 25. Although I perfectly match the addressed population and would have been genuinely eager to attend, I could not put the event into my schedule, as I will be out of Barcelona that day. Where will I be? In Copenhagen, co-chairing a conference on international management.

The peculiarity that struck me was that on October 25, I will be fulfilling two roles, being simultaneously “a German expatriate” living in Barcelona and a Barcelonian “expatriate” (or international business traveller for that matter) spending some time in Copenhagen thinking about international management more broadly 🙂 Playing a little more with this fact made me conclude that on that very day in October expatriating myself from Barcelona would prevent me from attending an event as a German expatriate. Finally, I would probably confuse colleagues in Copenhagen by saying that I expatriated there from Spain, where I am a German expatriate…

Although this is not the most extraordinary day in my expat life and career, this overlap of events makes for a good illustration of global mobility overall. Increasingly, it is becoming really difficult to follow the notions of ‘who’, ‘where to’ and ‘from where’ in global mobility. Maybe in a few years ‘I am Barcelonian’ would become too narrow and limiting a title for any expat story to fit with?

One thought on “Global Mobility in a Day”