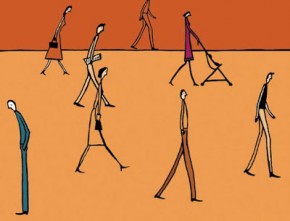 It is fairly common knowledge that the more stress one experiences, the higher one’s susceptibility to illness. While the link is not that straightforward and many possible stress mechanisms continue to be under debate the relationship between stress and health is established by now. What I find even more interesting in light of this blog though is the work by Sheldon Cohen and colleagues, which suggests that susceptibility to physical illness can also result from social isolation.

Specifically, about 20 years of research has allowed professor Cohen to conclude that our social networks and social support can be beneficial to our health, while social isolation may increase susceptibility to infectious illness. In his studies, Cohen defined social network in terms of social integration (e.g. being married, belonging to different social groups, having close family and friends), and social support as the availability of social resources to cope with stress. In the well-known Pittsburg Common Cold study, Cohen exposed participants to a virus that causes mild cold and then monitored who out of the participants would actually develop the clinical illness. The results indicated that it is possible to predict who of the participants would get ill based on specific psychosocial measures: people with fewer active social roles (1-3), hence in relative isolation, were four times more likely to get sick than people with a higher amount of active social roles (6 or more). Therefore, Cohen and colleagues concluded that social integration is directly related to immunity and health. In other words, even in the absence of chronic stress, lack of social integration makes us more susceptible to illness. In contrast, social support is thought to operate as a stress-buffer, protecting us from stress, yet not relating directly to our health status.

As such, it seems that even mild isolation, as in the case of a lack of social roles, can be harmful to our health. Isn’t this a relevant piece of information for expat management? Indeed, the topics of expat blues and expat loneliness are one of the most prominent when speaking about expatriation challenges.

Naturally, the harm of loneliness and isolation has long been discussed already, raising their detrimental influence to both physical and mental health. There are a few extreme examples as well. For instance, a BBC article this year describes how extreme isolation, such as in the case of imprisonment or solitary round-the-world yacht races, can distort one’s sense of time and cognitive functioning, cause anxiety and emotional breakdowns, and even lead to hallucinations.

Fortunately, the described cases of extreme isolation are too far off for business expats… but the relationship between health and social integration is not! Just think about a newly arrived expat, who still lacks local contacts, has little and largely virtual interactions with home country family and friends, and is absorbed in and often overwhelmed by his new job in the host organization. Similarly, expat spouses often face a risk of poor social integration. As discussed in one of my previous blog posts, trailing spouses may encounter a loss of identity, which closely relates to the number of social roles they have. For example, when losing a job back home because of relocating with the expatriated spouse, the trailing spouse also loses the role of an employee and the related social network: hence the relative isolation and, respectively, poor health.

Therefore, evidence suggests that loneliness and social isolation are not only psychologically uneasy states, but may likewise negatively affect one’s immunity and physical health. Given the importance organizations place on employees’ health and safety, the discussed notions give yet another reason for better and more profound expatriation support.

13 thoughts on “Expat Health: When Illness is a Matter of Social Integration”