it has been 64 days since Russia invaded Ukraine. Over these months we have seen the Russian campaign stall, re-group, and concentrate its forces on the Eastern part of the country. News reports indicate that in some places the Ukrainian army is making progress and in others, the Russian army is making slow but steady progress at an enormous cost.

A question I am often asked is where all of this is going and what, if any, could be the endpoint for this war.

While I have no crystal ball and Russia’s latest comments about Moldova are deeply concerning, I do believe a likely scenario is a de-facto partition of Ukraine much like that which exists in Korea and Jammu and Kashmir. 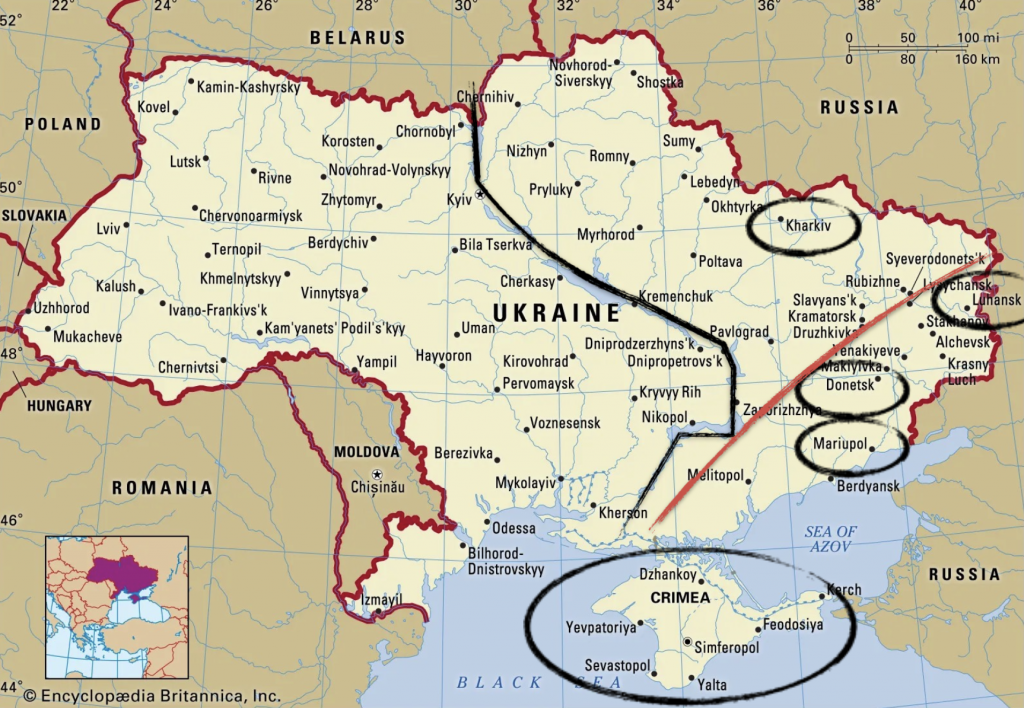 The starting point for this outcome is the redeployment of Russia’s forces and its apparent inability to defeat the Ukrainian army and force a change of government.

A second point is that the partition of Ukraine along the Dnieper river seems unlikely to me as Ukraine’s second-largest city, Kharkiv, would fall on the wrong side of the line. Taking Karkhiv would cost the Russians dearly and reports of Russian casualties are already very high with estimates ranging from 15 to 22,000 dead with perhaps another 20-40,000 wounded. Experts say that a fighting force that loses 10% of its people begins to lose its will to fight and I do not think the Russian leadership will risk a mutiny for the sake of Karkiv.

More likely, in my opinion, is Russia will keep advancing along the open plain of the Donbas until the entire region and the coast of the Sea of Azov is firmly in its hand. Reports say that the open nature of the wheat and barley fields make it possible for the Russian Artillery to clear an area before its troops carefully follow. Once these goals are achieved then I think it is possible that Russia will agree to a temporary cease-fire contingent on the successful resolution of peace talks which can continue in Turkey or perhaps move to Belarus or someplace else.

Russia will demand that its annexation of Crimea and the future of the Donbas be recognized by Ukraine and I find it unlikely that Volodymyr Zelensky and his government will ever do that. the Ukrainians will demand that Russia give up both regions as well as pay for the reconstruction of the country and I do not believe that Vladimir Putin will ever admit that the war was all for nothing. This would lead to a stalemate reminiscent of the situation after the Korean war in 1953, the first war between India and Pakistan in 1947,  and the brief war that ensued after China invaded India in 1962. All of these conflicts ended in a cease-fire that never resulted in a full diplomatic resolution. Those cease-fire lines became the de-facto borders between the countries involved. 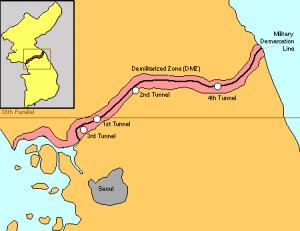 In Korea, it is called the DMZ or Demilitarized Zone and is essentially a 2-kilometer-wide strip of territory running across the entire country roughly along the 38th parallel. I have been there and on the Southern side, they have built an observation post, snack bar, and a gift shop. You can even go down and see the one of the tunnels that the North Koreans built to go underneath the highly fortified border.

Although the DMZ has been the de-factor border between North and South Korea for 69 years, both countries still refer to themselves as Korea and do not officially recognize the division of their country. This is where Donald trump walked into North Korea to meet Kim Jong-Un in 2019. 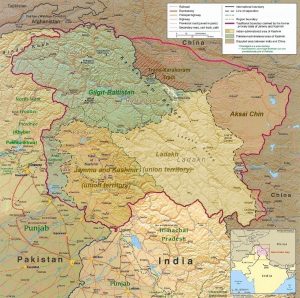 In Jammu and Kashmir, they call similar lines that were drawn after inclconclusive wars the Line of Control. West of Kashmir, the line of control seperates the province, now Union territoy form the Pakistini state of Azad Jammu and Kashmir or simply Azad Kashmir. In the North East, another line of Control sperates the Indian state of Ladakh from Askai Chin, or the name the Chinese give the region they took form India after the invasion of 1962.

In 2019, the Indian governement led by Narendra Modi changed the special status of Jammu and Kashmir which was protected by the Indian consituion and made three UNion terrioteis called Jammu, Kashmir, and Ladakh. The thing is that India has never given up its claims of soveriegnty for either Azad Kashmir or Askai Chin even though the situation has been relatively stable for decasdes.

This, I fear is a likely end state for the war that Russia has unleashed on Ukraine. Comming back to the situation in Moldova, Russia has been helping seperatist who want to make a new country, called the Pridnestrovian Moldavian Republic or Transnistria along the left bank of Dniester river which broder Ukraine. One could imagine that Russia’s egnuune war aims is to link Transnistria to the Crimea and the DOnbas and effectively cut Ukraine off from the Back Sea.

The probelm with this idea is that the Ukranians will fight t the end to protect the sourthern part of the country and this would also involve the occupation of Odessa. Odessa is a largely srussion speaking Ukranian city but I knw first hand that the people of the region are proud to be Ukranians even if they speak Russian with their families.

The only problem with this, and other geo-strategic anaylsys done by serious professionals is that we simply do not know the state of mind of Vladmir Putin. In a recent video his governement posted of him being “briefed” by his defense Minister, the man not only did not look well, but seemed completely disconnected from reality.

We can only hope that someone in the Russian governeemnt is concerned about the deaths of thousands of Russian soldiers and the long term effects this war will have on the Russian people. While far from perfect, a cease fire and a new line of control will at least stop the slaughter of innocents and allow millions of people to go home.