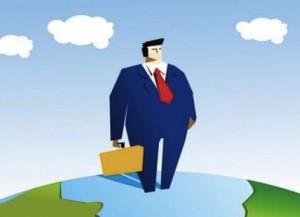 An international organizational career can be viewed as a traditional pattern, because managers following this path have the longest tenure with the same employer, and as part of this tenure take two or three long-term assignments abroad. Employees in this category tend to be very career oriented and they view expatriation as a necessary step towards further career development, which explains why they build their career with one employer. As stated by the authors, rather than assigning importance to the experience of expatriation, these managers emphasize the importance of repatriation to their home organization, as a step signifying the continued connection with the employer. Comparing the four typologies, the authors also note that managers with an international organizational career have the highest objective career success, hence earning higher salaries, have more subordinates reporting to them, and reach higher positions with one employer.

Given how highly this traditional approach is valued and how much loyalty towards the employer it involves, companies should plan for such careers to create a pool of highly skilled international managers, who will stay with the company for a long time. To retain these managers, companies should plan appropriate international career paths, which would enable them to combine international and national work periods without gaps in career development. Hence, repatriation plans should be in place with definite and suitable job assignments, which would allow the repatriate to use the new skills and knowledge they have acquired. Moreover, as these managers strive towards objective career success, which can be one of the selection criteria, companies should provide them with adequate compensation packages and other career status benefits. Last but not least, as the authors note, companies should continuously work on maintaining the psychological contract with the expatriate to be able to retain them in the long term.

From the company perspective, as discussed in my earlier blog post, managers with boundaryless careers can offer some advantages that cannot be offered by traditional expatriates. These managers are best suited for projects of limited duration that require an international mindset, but are managed still at the regional level. As these employees are highly mobile and highly self-managed, such international projects can be sufficiently supported by local HR functions. Finally, as these managers usually have some specific knowledge that is transferred between organizations, companies could benefit from networking with other organizations, aiming to develop a shared pool of international itinerants.

A transnational career pattern is similar to an international organizational career in that it is characterized by staying with the same employer for a long time. However, different from the previously discussed pattern, transnational careerists spend almost their whole work life abroad, relocating to many different places. As identified in the current study, such employees value an international career as important for achieving promotion, income, challenging work, and a rich private life. Compared to the other career patterns, transnational careerists have the lowest objective career success, however the subjective career success is as high as in the other patterns. Similar to employees with boundaryless careers, it can be argued that these managers value inspiring and interesting jobs or job environments, as opposed to external success factors.

Companies should benefit from transnational careerists in case they need highly mobile managers, who would fulfill different tasks in several different subsidiaries abroad. The authors suggest that when selecting employees for such careers, the potential candidates should perceive international experiences as highly important, but the career in a traditional sense should be of less importance for them. To retain such employees, companies should ensure that subjective career success is perceived, which is why it is better to manage transnational managers from corporate headquarters, keep personal contact with them, and ensure their professional development throughout the different assignments.

The early career pattern describes the traditional view of expatriates, who work for several years abroad, and then permanently repatriate back to their home-country company. These managers tend to value such an international assignment from a career point of view. The authors argue that the group of early careerist is also a pool of potential candidates for the three other career patterns, as after their first assignment some employees might decide to further embark on an internationally mobile career. As such, companies should pay a lot of attention to these employees during their first assignment, assess their expectations and experiences, as well as maintain the psychological contract to define the further path of these managers.