For the last few weeks this space has been exploring different aspects of the global water business and has mentioned a figure of $ 500 billion as the total value of goods and services connected to water around the world.

In a report published in 2009 , Mckinsey distinguished between the water basin level or the “upstream” part of the business and what it calls the traditional perspective emphasizing “downstream water supply and sanitation, as well as industrial use. According to this report, the traditional sector moved about $ 485 billion in 2005 and was projected to reach $ 770 billion by 2016.

Global Water Intelligence, an industry web site and magazine estimates the current market at $ 556.8 billion and projects 3.9 % through 2018.

Using a different definition, SNet, a competing source of date for the industry estimates the total size of what it calls The Global Water Market at $ 375 Billion with growth on the order of 4-5% and about half of the sector coming form municipal water utilities.

Another way to look at the water market is to consider the fundamental aspects mentioned in last week’s post on the 15 draught in the American West and earlier posts on sanitation.

Looking at it this way the market has four distinct segments as follows:

Water can be moved from one region to another as it was in the first years of the last century and involves enormous infrastructure projects such as the $ 1 Billion dollar  project to build new tunnels for New York City and the staggering $ 62 Billion South North Water Transfer Project in China. 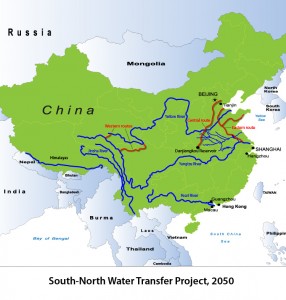 Water is also pumped from underground aquifers and increasingly, according to a NASA study, states and private actors have been withdrawing water from this course at an increasingly alarming rate.

The last mainstream option is to take water form the world’s plentiful oceans using desalination and that business, according to Freedonia, is now a $ 8.6 Billion dollar industry.

According to another industry newsletter, WaterWorld, utilities lose 25-30% of the water they do have through leakage throughout the system and thus another  business opportunity is to plug the leaks. For this, there is enormous business in sensors and data algorithms to find the leaks as well as smart valves and civil engineering works to repair systems built long ago.

Next there is are generations of more efficient irrigation equipment, industrial machinery and household technology including  appliances, faucets, showers, and toilets which all can drastically cut down on water usage. Drip irrigation alone is thought to be about a $ 5 billion market!

While it is difficult to calculate, the idea of switching to water frugal crops or re-thinking the attractiveness of lush grass lawns also creates interesting business opportunities for entrepreneurs and large companies who can help people maintain a high quality of life in the face of water scarcity.

Finally, the latest estimates are that 768 million people do not have access to drinking water and 2.5 billion lack access to improved sanitation. Providing these services, which the UN has defined as human rights. The World Bank’s Water and Sanitation Program has been working since 2007 on the Economics of Sanitation and found that the cost benefit of providing sanitation is overwhelming and could represent another $ 250 Billion opportunity just to build the minimal infrastructure required.

The aspect which attracts me most about the water market is that it seems to be a very safe bet over the long term. There will be more people on the planet and we need water to live. While there have been costly desalination plants which have been shut down as the rains came back or ground water was found to be a cheaper alternative in the short term, the fact is that we need water to drink, wash, irrigate our crops and even run our industry and power plants.

As there are no substitutes available, it seems a pretty safe bet.