Another interesting thing which came out of the Doing Good Doing well conference that IESE’s MBA students organized a few weeks ago is the role of the news media on the issue of environmental sustainability and the larger topic of globalization.

I have some gained some insight into how the media works by being Academic Director of IESE’s Advanced Management Program in Media & Entertainment for the last four years and find the industry tremendously engaging. This year’s program, by the way, starts in New York City on June 8th this year, has one module in Los Angeles and will conclude at the World Mobile Congress next year in Barcelona.

Digital communications and devices has been having a profound impact on media businesses as it changes the way media is produced, distributed and consumed. In some cases, like the music business, the entire value chain of the business has shifted and in others such as television news the transformation has begun but there is still a viable business model, at least in the U.S.

In the American newspaper business, the impact has been devastating as internet based classified services such as Craigslist has reduced the classified ads section of most newspapers  to a fraction of their former selves. Without classified ads, newspapers are struggling to keep their editorial staffs intact.

The solution for some newspapers like The New York Times and The Guardian, has been to develop the on line aspect of the brand and while the economics of digital have yet to be demonstrated, both command increasingly large audiences on the web. The International Herald Tribune was rebranded as the International New York Times in order to make it consistent with the web site.

While the media business i is changing very fast due to the internet and mobile technology, what has not changed is the power of a good story. Media people love telling stories and all of us are attracted to them.

News, at least in the U.S and the U.K, is also increasingly becoming more about the stories of the people involved than the events themselves and even stalwart CNN is shifting to more entertaining, stories based coverage.

The Guardian reaches almost 10 million people per month when one combines its digital side with its daily and Sunday print editions. The advantage the Guardian  is that it is owned by the Scott Trust, and therefore has been able to build its digital presence with less financial stress than its rivals

For the Editor in Chief of the Guardian, Alan Rusbridger, Climate change is the “biggest story journalism has never successfully told” and to change that, the paper, or should I call it the website?, is launching a new initiative to tell that story.

The problem for news is that climate change is happening relatively slowly and is essentially a depressing story. For the Guardian and Mr. Rusbridger who see it as mankind’s greatest challenge much more work needs to be done as most people still do not see the issue with the same urgency as he and his colleagues despite the overwhelming scientific evidence. 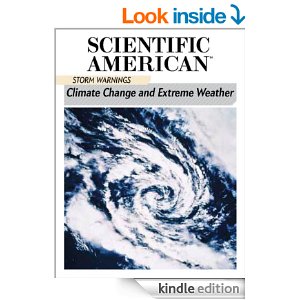 For others, such as Bjorn Lomborg, the mainstream media has helped fuel the narrative that the world is falling apart and that climate change is not as high priority an issue as sanitation, infant nutrition and research into new forms of energy.

In Storm Warnings, a new book out by the editors of Scientific American, one can read a number of stories showing how the current amount of severe weather can only be explained by higher CO2 concentrations and while I do not have the training to judge the science, it seems pretty compelling to me.