On the 23rd of June, the United Kingdom will hold a referendum on whether it should remain in the European Union (EU) or strike out on its own potentially causing a shift in international relations as well as affecting the economic future of the U.K. and Europe as a whole. 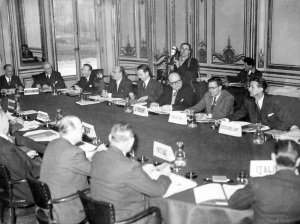 The origins of the European Union go back to the post war re-construction of Europe and specifically to the Conference on European Economic Cooperation which was held in Paris in July 1947 with the presence of 12 European countries including: Austria, Belgium, Denmark, France, Greece, Iceland, Ireland, Italy, Luxembourg, The Netherlands, Norway, Portugal, Sweden, Switzerland, Turkey and the U.K.

The purpose of the conference, which was convened by the United States, was for Europe to provide a common framework for the distribution of the funds from the U.S. Which would become known as the Marshall Plan. The thought was that the U.S. Congress would only agree to the program if it was clear that Europe itslef was changing and that Europeans would act with one voice.

Alan Milward provides a detailed account of the political issues connected to the conference and some of the fundamental disagreements that arose and persist to the present day. In the end the conference report was only produced after extensive American pressure and many substantive issues, such as how far integration should go, were left unresolved.

Largely because of these issues, the U.K. did not join the Treaty of Rome when it was signed ten years later and was also absent when the European Community was founded 10 years after that. Britain only came into the EU in 1973 after Charles De Gaulle was succeeded by Georges Pompidou in France and Edward Heath became Prime Minister in Britain.

Heath was defeated by Harold Wilson in the 1974 elections and one of Wilson’s promises was to hold a referendum on the issue of Europe which he supported. That vote was held in 1975 and 67% of the votes were in favor of staying with the European project according to the BBC.

For the Vote Leave campaign, the key issue is for Britain to take back control from faceless bureaucrats in Brussels. The argument is that Europe has not managed to keep pace with the changes in the world and is deeply flawed as a political experiment. Britain will be able to negotiate a free trade deal with Europe and thus recieve many of the advantages it currently enjoys without having to put up with European regulations and spending £350 million per week to subsidize European institutions.

The Stronger in Europe people argues that the UK will have a better economy if it stays in the EU, will be able to participate in EU decision making, and will be more secure in terms of terrorist and geo-political threats. On the issue of the cost of the EU, the platform argues that Britain gets back 10 times what it spends.

The Guardian columnist Timothy Garton Ash sums up the arguments by writing that “Brexit is riskier than Bremain. This is incontestable.” The BBC claims it is impartial and has published a guide to the issues as it sees them that can be found here.

In classic UK style, politicians, business leaders, and actors and football players have taken sides in the debate much like Marvel Comics new superheroes movie. On the leave side you have London’s former Mayor Boris Johnson and Nigel Farage of the United Kingdom Independence Party. Both prime Minister David Cameron and the leader of the Labor Party, Jeremy Corbyn, are strongly in favor of staying in Europe.

One colleague on the faculty told me he thought the anti-Europe people were more colorful. One of my daughters, who lives in England, has come to the conclusion that the Brexit crowd is older and more ill informed while younger, more educated people will vote to stay in Europe.

The latest polls I have managed to find place the vote too close to call with the The Independent, for example, calling to 50/50 and underlining the idea that older voters are most likely to vote for leaving.

Last week, there was some discussion in the press about U.S. President Barak Obama strongly supporting the idea that the U.K. should stay in Europe. Such opposition seems to ignore the fact that increased european integration  has been U.S. policy since Harry Truman and his successor Dwight Eisenhower who wrote that his experience “convinced him that the uniting of Europe is a historic necessity for the peace and prosperity of Europeans and of the world”.

Sticking to form, Donald Trump has said that while he has “no opinion” on the matter he does expect the U.K. to leave Europe because of all this migration “craziness” even though he knew “nothing” about Boris Johnson.

The real problem I have is that I both agree with and am uncomfortable with arguments on both sides of the debate. Europe, and its institutions clearly need an overhaul and may not be able, in its present form, to deal with the complexity of the world.

On the other hand Europe needs the UK and the UK needs Europe.

My hope is that the Stronger in Europe campaign wins and then is able to leverage that victory into profound and lasting impact on the European project to make it faster, leaner, and able to deal more directly with the issues facing the continent today and tomorrow.

One thought on “Brexit? The Battle for the United Kingdom”