The highway was opened in 1938 after parts of the railway that preceded it were destroyed in a category 5 Hurricane in 1935. A very real question is whether this part of the world has any long term future given the apparent warming of the planet. 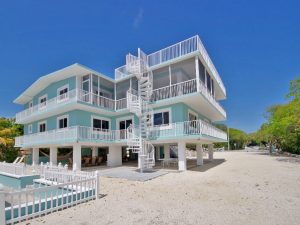 In the Keys, resilience is not an academic subject or a new idea as the highest point is only 18 feet (5.5 M) above sea level and most of the land is only a few feet above the sea. Houses here are built to withstand storms and floods and people take the storms as a natural part of life. The good news is that there has not been a major storm since Wilma in 2005. The bad news is that one of the effects of global warming is a probable increase in what are officially called “Extreme Weather Events” or Big Storms.

The basic idea is that a slightly warmer earth has more energy in the atmosphere available for storms and it most likely makes them bigger than they would be otherwise. Some authors plot the increased amount of property damage done by recent storms to show how they are getting more destructive over time but this idea also needs to take into account the increased amount of investment in coastal property.

In any case, the Keys and Southern Florida in general are particularly vulnerable to the effects of climate change as can be seen in a terrific tool provided by the Nature Conservatory, NOAA and others who have created a platform called Coastal Resilience. Using the interactive mapping tool, you can see things like locations where there have multiple insurance claims such as the one provided for the Miami area and shown here.

Another thing you can do with the tool is simulate the impact of rising sea levels and storm surge on specific places such as the Keys. The islands would be devastated, for example, by a 3 foot (almost 1 Meter) rise in sea level and any kind of storm surge.

What is also encouraging is that a growing body of evidence shows that making good decisions about how to develop coastal areas, build homes, and preserve wetlands can have a tremendously positive impact on the ability of a community to survive increasingly strong storms and even moderate rises in sea levels. Wetlands, for example, have the ability to absorb storm surge as well as attracting tourists.

According to the Key West Chamber of Commerce, there are 18,000 owner occupied homes in the Keys and another 11,000 rental units. The homes have an average value of $360,000 or give a total of around $6.5 trillion in today’s market. Are those values sustainable in light of what is likely to happen or are the time scales involved too long for anyone to worry about?

My mother, who was born in 1934, suggests that it might not be a good idea to invest in ocean front property in the Keys. Others, including Donald Trump, insist that climate change is a hoax in any case so why bother doing anything about it.