According to the World Bank, the Turkish economy grew quickly from 2002 to 2012 and although its growth has since stalled a bit, it is currently the world’s 16th largest economy with per capita income of $10,500. The bank also insists that the rise in economic prosperity was largely shared by Turkey’s poor with poverty rates falling and over 6 million new jobs created.

According to Al-Monitor.com, Turkey attracted $130 billion in foreign investment from 2007 to 2015 and Turkey has been chosen as the regional hub for a number of multinational companies including both Coke and Pepsi, Microsoft, Intel and others. Turkey has also been discussed as a  growth market in a number of industries including cars and light trucks with Toyota, Renault, Fiat Chrysler,  Ford, and Hyundai all have plants or joint ventures in Turkey.

Too Good to be True

Turkey had offered investors a growing economy in a central location with a stable, pro-western government which might even eventually become part of the European Union. How easy to fly into Istanbul and stay in one of the 280 four and five star hotels, do business with educated, English and German speaking Turks and get things done.

In 2014, The World Bank rated Turkey 41 in its ease of doing business rankings just behind Israel and not far from Italy and Belgium.

In this story line, Recep Erdoğan and his Justice and Development Party represented a moderate, tolerant form of political Islam which offered a positive example to the rest of the Muslim world. 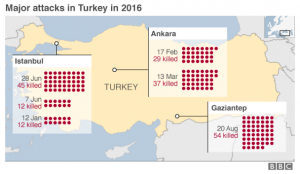 After the collapse of the peace talks with Kurdish separatists in 2015 Turkey has increasingly become riskier. Over 100 people were killed when two bombs exploded at a peace rally near the Ankara Railway station in October 2015 and as the BBC reported, there have been a number of deadly attacks across the country since then.

On July 15th sectors of the military attempted to take over the government and ordinary Turks came out in the hundreds of thousands to defend their President and his government. In the aftermath, however, Erdogan has gone on to arrest and dismiss tens of thousands of soldiers, police, public officials and teachers in what can only be called a political purge of all opposition.

The enemy of my enemy…

While the purge has caused concern in Western capitals, the geo-political reality is that the United States and its allies needs Turkey, a NATO member, to win the fight against ISIS and to help end, or at least control, the civil war in Syria. Turkey and Russia have also come close to a total breakdown of relations as a result of their backing different sides in that conflict and Turkey actually shot down a Russian plane in November last year which reportedly strayed into Turkish airspace.

In a move reminiscent of Henry Kissenger’s practice of realpolitik back in the 1970s, the U.S. Vice President, Joe Biden, was sent to Turkey last week to re-assure Erdogan of U.S. support in exchange for apparent promises on the future of the Incirlik air force base, which is central to the war effort, and Turkey’s increased support. It seems part of the deal was also to limit Kurdish ground forces to the East of the Euphrates river and also to support Turkish attempts to extradite Fethullah Gülen, the leader of a political movement called Hizmet that Turkey said was behind the coup attempt. Gülen is a rival of Erdogan and lives in exile in Pennsylvania.

Whatever was said between Biden and Erdogan, Turkish ground forces subsequently entered Syria in coordination with U.S. airstrikes and helped rebel forces liberate Jarabulus, a town West of the river, from ISIS.

Peter Shwartz is one of the leading writers on the benefits of Scenario Planning and used the term as the title of one of his books on the subject. The basic idea is that some things are somewhat predictable such as a military coup in Turkey and its eventual involvement in the Syrian civil war.

Serious study of Turkish history and the structure of its civil society would reveal that events such as those in 2016 were bound to happen sooner or later. My hope is that those companies that have invested in the country and use it as a hub have sufficient systems and people in place to provide security and to be resilient in the face of the current situation.

One thought on “Doing Business in Turkey?”