Last week I was with a program we have for Enterprise Ireland for which we provide a training course for CEOs of small and medium sized business from Ireland and Northern Ireland called Leadership For Growth. 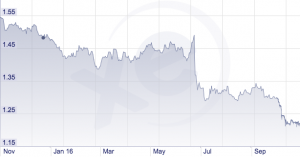 For the Irish, Brexit is not only a looming possibility but the approximate 20% drop in the value of the Pound since the vote in June has hurt a number of the program’s participants very badly as a large part of their business is exported to the U.K. and paid for in Pounds.

The situation in Ireland is particularly acute as the 6 counties in the North are part of the United Kingdom while the rest of the island is firmly committed to the European Union. Since the Good Friday Agreement in 1998 and subsequent amendment to the Irish Constitution, North and South have had the steadily improving relations. The border is open and commerce and trade flow back and forth and while there are still social problems to deal with, it seems that Norther Ireland’s “troubles” are a thing of the past.

To help the participants get their head around the future, we invited Nuria Mas, the Head of IESE Business School’s Economics Department to give them an overview of the current situation and what to expect.

After going through the latest statements by the U.K.’s new Prime Minister, Theresa May, Nuria explained that there were essentially three or four scenarios as to what will happen over the next two and a half years.

One Scenario is what is normally referred to as a hard exit in which the U.K. would end up with a relationship with Europe like any other non member country as per the rules of the World Trade Organization.

The opposite is that due to a new referendum or some really artful political negotiations, the U.K. would end up either remaining in the European Union or establishing a new treaty which gives it basically the same situation as it has today including European regulations and the role of the city of London in the continent’s financial system.

In between these two scenarios is the idea that London could negotiate a deal similar to that of Switzerland or Norway such that the U.K. could continue to enjoy the benefits of the trade with Europe without the rules and free movement of people which were the key complaints of the supporters of Brexit.

While she was not ready to make a prediction of what will happen, what Nuria did say is that we are headed for a period of extreme volatility. The question is then what is a business leader to do and how to plan for such uncertainty.

In my opinion, the only sensible course is to actually develop three different sets of plans, one for each scenario and to build in sufficient resilience to be able to switch back and forth between them depending on the evolution of the political and economic situation.

The way to do that involves looking deeply at a company’s sales strategy, operations and logistical footprint, talent management approach and financial plan and think through how each of the Brexit scenarios will affect each of these and other aspects of the business.

The next step is to bring them together and plot a course which makes sense in all three situations and then build in sufficient resources and flexibility to be able to survive and maybe prosper in all.