The day after Donald Trump‘s upset win last Tuesday, I found myself flying from New York to Shanghai to teach on IESE’s Global Executive MBA.

Reading the paper here this morning, it appears that the Chinese leadership is delighted with the news from the U.S. 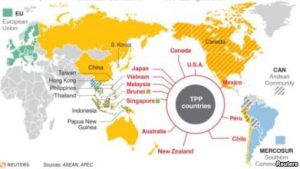 The first thing that seems to gladden the Chinese is Trump’s staunch opposition to the TTP. The issue which seems to have gotten lost in the U.S. campaign is that the TTP was crafted in order to limit Chinese economic expansion across the Pacific Rim and to make it clear to the countries in the region that they are better off looking toward Washington than Beijing.

China fully intends to extend its influence across the region through the financing and construction by Chinese firms of needed infrastructure improvements. The price of China’s largess will be support for its expansion the East and South China Sea and perhaps the closure of American Naval Bases.

The End of the Pivot to Asia ?

The other expected outcome of the upcoming Trump administration is the end of the United States’ pivot to Asia which involved not only the trade deal but also a redeployment of the American Navy.

The Chinese understand that Trump will focus attention on domestic issues and perhaps reduce military spending. As a candidate, Trump charged American allies with having a free ride and said that unilaterally keeping the sea lanes open was a bad deal for the American taxpayer. China will be delighted if the mission of the Third and Seventh fleets is reduced or even better if the fleets are recalled.

The first country to switch allegiance might be the Philippines under its tremendously controversial President Rodrigo Duterte. Besides declaring open season on drug dealers and their customers causing the killings of thousands of  people by the police and extrajudicial hit squads as well as the arrest of tens of thousands.

In China a few weeks ago, Duterte announced his country’s “separation” from Washington publicly insulting Americans and embracing the Chinese as fellow Asians.  After the election, Duterte  said he was hopeful about working with Donald Trump since they “both like to swear”. In contrast, Duterte bridled against Barak Obama’s criticism of his “shoot to kill” policy with respect to drug dealers and insulted his mother.

The issue is not about China’s rise any longer but about China’s expansion to become a world power. China has invested heavily in Latin America and Africa and is developing an alternative to the World Bank. Chinese companies such as Huawei have expanded all over the world largely assisted by government owned financial institutions.

Most economists maintain that this century will be all about Asia. If Washington is not attentive, China will establish itself as the economic and military leader of that century. Barak Obama understood this but neither he or Hillary Clinton was able to explain it to the American people.

Let’s just hope somebody explains it to Donald Trump.