It snowed in New York last week and I could see the drifts in Central park as I walked to IESE’s building on 57th street this morning. Although it is still pretty cold, what is remarkable about this week of weather is that it is remarkable at all. The taxi driver explained to me that this was New York’s first big winter storm.

I am in the city for programs we have for executives from Ireland and a short focused program for people running global businesses using matrix organizations. 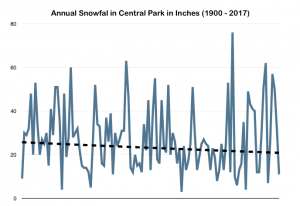 When I was growing up outside of the city, I remember that it started to Snow at the end of November and the snow would stay on the ground until mid March. I actually checked the data and while it is not exactly the way I remember it, there has been a steady, statistical decline of snowfall in the city over the last 117 years.

According to the National Oceanic and Atmospheric Administration, 2016/17 was the warmest winter on record for the lower 48 States ever and Alaska is experiencing its second warmest winter.

According to NOAA,  el Niño is exceptionally strong this year and the average temperature for the lower 48 states was 5.7°F above the 20th century average.

This kind of data has been coming out consistently for years and the science on climate change is well established. Despite of all this, the President of the United States still maintains that the whole thing is a hoax and is trying to get the former Attorney General of Oklahoma, Scott Pruitt, to be the head of the Environmental Protection Agency which he sued a number of times in support of the oil and gas industry.

In theory, the U.S. Senate can block the nomination but, as I have written in an earlier post, it needs at least three Republican Senators to stand up to President Trump which so far they have not done.

According to the ranking Democrat on the Senate’s Environment and Public Works Committee, Tom Carper, Pruitt’s testimony to the committee was “shockingly devoid of substance, did not rely on empirical evidence and did not reflect the thorough effort that a task so important to our democracy demands” .

The challenge for Managers, CEOs and members of Boards of Directors is how to process these two conflicting realities. On the one hand, the natural environment is clearly telling us that we need to fundamentally change the way we do business and join what Al Gore calls the energy revolution.

On the other, the political environment is pushing the other way. The current American administration is determined to roll back the environmental legacy of  Barack Obama and support the oil and gas business in every way it can.

In my view, the answer to this question has to do with the time frame that is used for planning. While people like Trump and Pruitt may manage to go against science, common sense and the international community for a few years, the American people will eventually come to their collective senses and elect a sensible government.

Over the next 10-20 years, the world will most likely go in the direction of cleaner, more distributed, and more renewable energy.

My advice is to distinguish between the next 2-3 years and the longer term trends which are looking green to me.