The week after the horrific terrorist attacks in Barcelona and Cambrils I found myself in Delhi on business. While I was there riots flared up in the Panchkula, a city 243 km from the capital when a powerful guru, Ram Rahim Singh was convicted of rape and sentenced to 5 years in prison.

The case against Singh had been running off and on in the Indian courts for 15 years and centered on charges that he routinely raped young girls who would come to stay at his temple/residence as his disciples or sadhvis. Singh is the head of the Dera Sacha Sauda a religious and social organization that according to the Hindustani Times boasts 40 million followers and runs 50 ashrams around India.

Singh’s followers poured into the streets after the verdict and began to set fire to busses and train cars. Police were called out to control the rioters s and eventually opened fire killing 30 protesters. In Delhi the police had anticipated trouble and prohibited any and all public gatherings. Still a number of busses were torched and police check points snarled up the already terrible traffic.

Business as Usual
One thing that struck me during  week end in India was the apparent calm of the people I was with who seemed to take the conviction and violent aftermath in stride. No one seemed to have any doubts about Singh’s guilt and if anything appeared that such a powerful figure could actually be brought to justice. With regards to the violence, the general reaction was that it was far away and only involved Singh’s supporters. 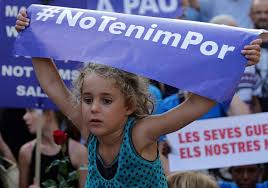 In the United Staes, the reaction to the tragic ending to the protests in Charlottesville is still being felt and in Barcelona 500,000 people came out in the streets under the banner “we are not afraid” the Saturday after the attack. Imagine what the response would be if police opened fire on rioters in the U.S. or in Spain?
The appeal of authoritarian government
While in India I also had the opportunity to speak with a number of people about the Indian Prime Minister, Narendra Modi, whose picture you see on giant billboards all over the city. The overall perception seemed to indicate that people were happy with Modi and his reforms although they were a little worried about his tendency to promote himself and to continue to expand his hold on the power. 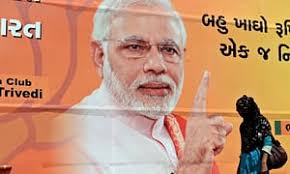 Ram Rahim Singh had supported Modi and his party and urged his followers to vote for them and some people were surprised that the rape case was allowed to come to trial in the first place. Mr. Modi condemned the rioters saying that “in the name of faith, violence will not be tolerated” and apparently approved of the police response.

What is clear is that the world is seeing a trend toward such leaders as well as an increasing acceptance of violence. Whether it is Rodrigo Duterte in the Philippines or Vladimir Putin in Russia a number of countries appear to be falling under the sway of authoritarian rulers from the left and the right. People seem to accept such rulers because they can bring order and prosperity.
On the flight Delhi I spoke with an Indian who had immigrated to the U.S. many years ago acquiring citizenship and building a prosperous business. In his view India needed a strong leader like Modi to clean the place up. The same man also supported Donald Trump in the American election and he saw a number of similarities between the two.
Perhaps this kind of leadership may be needed in some parts of the world but it is neither needed or even legal in the United States and the sooner Donald Trump understands this, or better yet leaves office, the better.
Share

One thought on “Living with violence and autocratic rulers”