Donald Trump’s announcement that the United States recognizes Jerusalem as Israel’s capital has been met with dismay in foreign policy circles, outrage in Arab governments and deadly violence in the streets. The first question is why is this a priority now when the current geo-political fudge seems to have been working for many, many years. The second is if business leaders involved in the region could have seen this coming.

The answer to the first question seems to lie in domestic political concerns both in the United States and Israel.

In 1995  the U.S. Congress voted to move the Embassy form Tel-Aviv to Jerusalem but in a political fix the law contains a prevision so that the President can sign a waiver every six months to delay the move based on considerations of national security. For the last 22 years this approach has worked with  Bill Clinton, George W. Busch, Barak Obama, and even Trump signing the waiver like clockwork.

The 1995 resolution, and continued resolutions such as that of the U.S. Senate marking the 50th anniversary of the six day war some months ago, gave political cover to members of congress who needed to appeal to jewish and evangelical christian voters in their districts but did so in a way that did jeopardizing U.S. interests in the Arab world or completely de-rail the peace process.

The final status of Jerusalem is probably the most complex issue to be worked out and international recognition of West Jerusalem has long been considered a prize that Israel would trade significant concessions for and most professional diplomats  and military leaders were against the move. 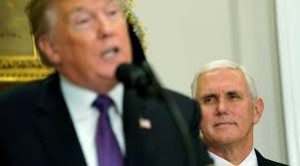 In the U.S., the thing is that Vice president Mike Pence is an evangelical christian and has been reportedly pushing hard for the announcement to show his electoral base that his cohabitation with Trump is delivering results. The evangelical position on Jerusalem deserves careful study and can be followed up in an insightful article published in the L.A. Times.

In Israel, the political issue at play is the ongoing corruption scandal involving colleagues of Bibi Netanyahu, the hard line Prime Minister, who is reportedly a personal friend of Charles Kushner, Ivanka Trump’s father in law. Trump has appointed Ivanka’s husband, Jared Kushner, to be his envoy to broker a new peace deal between Israel and the Palestinians despite the fact that the man has no diplomatic experience or training. By making the announcement Trump also bolsters Netanyahu’s position in Israel at a critical time.

Trump’s speech on Jerusalem talks about making the move as part of his larger efforts to bring peace to the region but few serious analysts can see how this move will help at this point in time. In an apparent attempt to stay in line with the Senate’s last resolution on the topic, Trump said that the announcement did not mean the U.S: was “taking a position of any final status issues, including the specific boundaries of the Israeli sovereignty in Jerusalem, or the resolution of contested borders” but it was exactly to keep options open that the waiver was signed over and over again by Presidents of both parties.

For business leaders with interests in the region, the announcement will most likely complicate matters in the next few months. Although in practical terms it will take years to actually move the Embassy, and Trump has already signed another waiver, the announcement has already damaged the image of the United states in the Arab world and will make it harder for americans to do business in the region.

In hindsight, it almost seems self evident that Trump would fulfill this campaign pledge and not listen to the professionals when it comes to diplomacy and security. His willingness to place domestic and even personal concerns ahead of the interest of the United States and even the world is being proven again and again in his short, troubling presidency.

In my view this whole episode only stresses the need for business leaders to look at the widest set of geopolitical scenarios when developing medium terms strategies and be prepared for the unlikely and unexpected.