Although it is not widely discussed outside of the waste and recycling industry, China has increasingly become the destination for much of the paper and plastic that Europeans and Americans diligently separate in their household garbage.

A win win for the waste industry

The business grew over the last 10-15 years is fueled by a few related trends and is now falling apart as a result of an action taken by the Chinese Government last January. 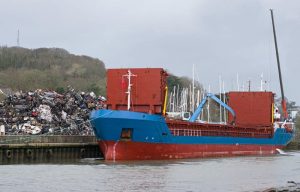 One trend is the trade imbalance between China and the US as well as the European Union. Because China ships so much to the West, the ships often go back empty making it very inexpensive to send something back, even if it has relatively low value per ton. Garbage fits the bill nicely and became, according to one source, the 6th largest export from the U.S. to China!

Another is that much of what China is shipping is made out of plastic and placed in cardboard boxes before shipment. Waste paper and plastic is a good raw material as long as the price is low enough and the waste streams are uncontaminated or in other words do not have other types of garbage mixed in with them.

The third trend is that Europeans and Americans are getting good at sorting their trash and are increasingly reluctant to burn it or put into land fill sites. Since the volume of both plastic and paper waste exceeds the demand, the excess material could be sent to China.

The fourth has been that since most recycling schemes are not perfect and some contaminants do get in, it has been relatively inexpensive to have the trash re-sorted in China by workers at very low wages. European manufactures could thus choose the most high quality waste streams for their own operations and let the Chinese have the rest.

The final part of the story was that up until a few years ago, Chinese officials were fairly lax about the country’s environmental policies such that any garbage that was not salable could be disposed of relatively cheaply.

The net result was lower prices for raw materials in China as well as just enough money in the system to pay for the West’s collection efforts. All of this has changed over the last six months.

Clean up your own mess

In a classic example of what is called the environmental Kuznet’s curve, China has decided that cleaning up its own environment is important and banned 24 categories of waste effective last January 1st. Part of the issue is that China may not have been collecting its own recyclable materials as much as it could have since very low cost raw material was coming form the West. Another is that since wages have risen, separating the foreign trash is increasingly expensive and there is some evidence that some of the low quality waste is placed in makeshift landfills or even dumped at sea.

The result is that the costs of paper and plastics is shooting up in China while the value of recyclable material has collapsed in the the U.S. and Europe and there is an enormous glut on the market.

One part of the solution has been for the operators of the industry to increase the amount of waste they are sending to other countries and two charts from the Politico tell the story in Paper and Plastic. The charts show thousands of tons per month in 2017 from Europe to China.

The first one shows the data for paper which has decreased as China tightened up the quality limitations for bulk paper. It also shows how Malaysia, Vietnam, and Turkey and India has taken up some, but not all the slack.

The plastics chart shows how the ban pushed Chinese imports almost to zero and again, how other countries are absorbing it.

Greenpeace estimates 12.7 million tons of plastic ends up in the oceans every year and one wonders how much of that comes from the export of trash from the West to poorer countries.

Perhaps its time to actually implement policies to recycle everything we use and reduce the waste in each country to whatever its real recycling capacity is? The Guardian not only has a good article on the topic but also provided the featured image for this blog.