During the Presidential campaign in the United States, Donald Trump made the point that NATO was obsolete and that the United States pays for a disproportionate share of its operating budget and its capabilities. Later, as President, Trump has backed off on his earlier statements although his administration continues to insist that Europeans do not pay enough for their own defense. 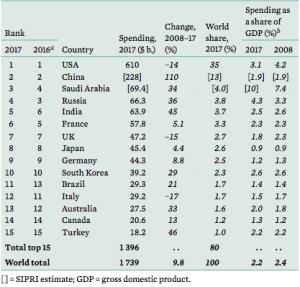 The facts are that the U.S. pays for about 22% of NATO’s $ 2.8 Billion dollar budget and also provides about 10% of its staff. What is more significant is that the U.S. will provide NATO with military equipment and soldiers in times of crisis and its capabilities far outmatch those of the Europeans.

According to the Stockholm International Peace Research Institute, the United States spent $ 610 Billion on its military in 2017 which is about equal to the the next 8 countries combined. This is estimated at 3.1% of GDP which is significantly higher than all EU countries and is also a favorite theme of President Trump.

The issue is that in the case that the political winds that made Brexit and Trump possible were to continue, then one could imagine military scenarios where the interests of the EU and that of the United States and the U.K. diverge. NATO was essentially created to protect Europe from a ground assault coming from the former Soviet Union and despite Vladimir Putin’s annexation of Crimea, it is hard to imagine Russian tanks attacking Poland or even the Baltic States any time soon.

Europe, however, has other security issues to worry about and is therefore engaged in a complicated diplomatic effort to build some kind of European military capability that could potentially operate independently as well as in support of NATO.

One of the most important steps in this process has been the establishment of a global strategy document by the European Union which can be found here. The document is remarkable as it lays out 5 comprehensive goals and takes the EU far from its economic roots and into essential issues which one would normally associate with sovereign states. The five goals are:

Additional pieces of the puzzle include the European Defense Agency, the Organisation for Joint Armament Co-operation and what is called Permanent Structured Cooperation or PESCO and is essence the beginnings of a European Defense Force.

While all of these measures are clearly positive, the underlying situation is still that European countries besides France and the U.K. do not spend that much money on defense. Germany, Italy, Spain, Belgium and Denmark are all under 1.5% of GDP and the European Defense Fund, which is earmarked in addition to the national budgets, currently has a budget of only € 5.5 Billion ($ 6.4 Billion).

An even more critical issue is that there does not seem to be a realistic chance of convincing the public in countries like Germany, Spain, and Italy that more money should be spent on defense as opposed to other critical things like education and health care. The only real hope is that by stressing cooperation and reducing waste, Europe can build a more capable and effective military force together and collectively become a full partner to the U.S. without either raising taxes or diverting funds needed elsewhere.

One thought on “Europe may need to defend itslef”