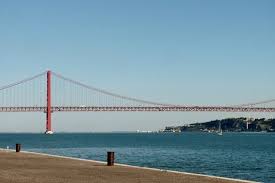 Last night I found myself walking on along the Tagus Estuary in Lisbon and besides the view of the 25 of April bridge and the Monument built to honor Portugal’s history of exploration the water itself was what most impressed me.

It seems many years ago, people would see dolphins in the water but they had vanished in the 1970s due to the city’s growth, pollution, and its lack of modern water and waste water management. Although I did not see them Sunday night, I am told the the Dolphins are back and what I did see were many people fishing in the Estuary.

The name of the Bridge, by the way, was changed from Salazar Bridge to the 25th of April in honor of the Carnation Revolution which deposed Salazar’s authoritarian regime on that date in 1974 a few years after his death.

The return of democratic government to Portugal opened the way for membership in the Euorpean Union and a complete restructuring of the governance and water management system in the country in general and of course in the Lisbon area.

At the end of June, 1976, Portugal  elected one of the leaders of the revolution, António Ramalho Eanes, as Portugal’s 16th President. One of his government’s first acts was to declare much of the area around the Estuary a nature preserve but it was not until 1993 that Aguas de Portugal (ADP Group) was formed.

ADP set out to clean up the Estuary in a massive public works program that included re-organizing the entire water and waste water sector and investing almost €700 million in infrastructure in order to make it possible to save the delicate wetlands as well as provide quality service to the regions 3.2 million inhabitants. The project itself is a miracle of outstanding engineering, politics, and project management and more details can be found here.

ADP has done a number of such projects across Portugal and is increasingly using its expertise in Africa and Latin America in countries such as Angola, Algeria, Brazil, Cape Verde, East Timor, Morocco, Mozambique and Sao Tome and Príncipe.

Water, of course, is essential for human life and quality water is needed for human progress.

What I find particularly interesting is that the Carnation Revolution came from the decision of Portugal’s military officers to stop the wars that Portugal was waging against independence movements in Portuguese Africa. Antonio Salazar’s response to the the independence movements had been to suppress them with military force. His successor, Marcelo Caetano, continued that policy putting tremendous strain on the Portuguese economy and its armed forces.

Although Angola, Mozambique and Portuguese Guinea has a long and horrific journey from independence in 1975 to today’s relative prosperity, it is heartening to see Portuguese capital and engineers at work in improving  people’s lives in the country’s former colonies.