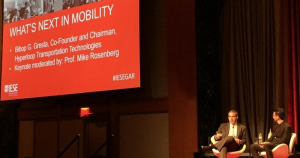 Last Friday IESE Business School held its Global Alumni Reunion in New York City and I had the privilege of presenting Bibop Gresta and the company he co-founded, Hyperloop Transportation Technologies.

The reality is that we are living at a unique time in human history. On the one hand the world is far richer than ever and the more than 7 billion people on the planet lead longer, healthier, and perhaps more meaningful lives. Authors such as the late Hans Rosling, Stephen Pinker, and Yuval Harari each present this positive story in different ways and I think all of us would benefit from reminding ourselves of our collective success from time to time.

The world however does face enormous challenges. Last week’s release of the IPCC’s Special Report on Global Warming and Hurricanes Michael and Leslie remind us that our natural environment is changing around us. Perhaps more immediate than climate change is the horrific air and water pollution that prosperity has brought to many people around the world.

The world’s people are also increasingly living in cities and the number of very large cities, with populations over 10 million people is growing every day. When I was born, only New York, Tokyo and Shanghai had such large populations and today there at between 15 and 35 such cities depending on the definition of the municipal territory and the source of the data.

Related to these phenomena, politics in many countries are increasingly polarized and the geo-political relationship between countries is growing tremendously complex. As discussed in a post a couple of weeks ago, the Trump administration  appears intent on taking apart, or at least reducing, the web of military and trade links that the United States has built up since the 1940s.

The exponential development of information systems technology combined with the decreasing costs of communications also feeds into these other issues and are in the view of Robert Reich, are to blame for rising inequality and anxiety around the world.

Finally part of the success we are experiencing and some of the problems come from technological innovation in other areas of endeavour such as the life sciences, the development space, energy, and the material sciences just to name a few.

For many, technological innovation of all kinds offers the best hope of solving the problems humanity is facing and building a world where the projected 9 billion people can live in prosperity and in a sustainable way.

The Hyperloop and Bibop Gresta

One entrepreneur who is focused on using different technologies, and especially energy storage, to change the future is Elon Musk. In August, 2013, Musk wrote a white paper describing a high speed train which would travel though a vacuum tube on a mag lev track and called it a Hyperloop. Although Spacex and Tesla continue to encourage the development of the idea by holding an annual competition on their test track in California, the two companies appear to have other priorities at the moment.

Instead there are at least three players working to develop the technology and one of them is Hyperloop Transportation Technologies. The others are Virgin Group’s Hyperloop One, which is backed by venture capital, and the China Aerospace Science and Industry Corporation (CASIC) which has also announced that it will develop a similar concept.

Bipob Gresta is an Italian who built one of the world’s first new media companies in Italy, sold part of it to Telecom Italia and went on to build an incubator in California that launched 70 startups! One of the things he learned in the start up area is the power of the crowd and has therefore built the company along the lines of Linux and Wikipedia or what Tom Malone called way back in 2004 a Loose Hierarchy. His idea is that we will not revolutionize the transportation sector by building a company the old fashioned way and thus is open to many different forms of collaboration and co-investment and development.

Bibop made a passionate explanation of why transportation around the world is badly broken and how the Hyperloop can not only move millions of people in a clean sustainable way, but bring the world  closer together!

He answered a number of questions from the alumni concerning operational details of the proposed Hyperloop, the system’s safety, and the economics and business case involved. Former students and faculty were impressed by Bipop for his passion for the project and  his vision for a clean, safe, and economically viable solution to the problem of transportation.