In 1992 Toyota published a remarkable document called the Toyota Earth Charter which in my view was a radical step at the time for an automotive company. The charter was revised in the year 2,000 and has had an enormous impact on the company and its environmental agenda.

The very first part of the document simply calls for Toyota to “Develop technologies to minimize the environmental impact of automobiles and automobile plants” and the company has made serious efforts in this direction ever since.

What is truly remarkable, from a technology management point of view, is that Toyota set out to pursue four different paths to sustainable transportation at the same time and have kept that effort up ever since.

One track was the development of a hybrid vehicle architecture which eventually became the Toyota Prius introduced in Japan in 1997. To date Toyota has sold 4.3 million of the car despite its rather awkward styling (I actually own one).

Even more significantly Toyota also took the step to offer its Hybrid Synergy Drive, the drivetrain developed for Prius, on almost all of its models over the years and has sold a total of 11 million hybrid vehicles to date. My car is actually a plug-in hybrid which means its battery pack (4.5 kwh) gives me just under 20Km of range on a full charge.

A second track was the development of battery electric vehicles and while I understand that Toyota has continued to finance research into battery technology, the company has not yet made a significant move into EV’s as did its arch rival Nissan which is now in the second generation of the Nissan Leaf. Toyota did plan on launching a production version of its IQ EV in 2012 but finally killed the project. Reuters reports that Toyota is currently betting on advanced solid-state battery technology and will make a product push when the technology is ready.

A third track in Toyota’s research has been to clean up emissions from internal combustion engines and like other car companies, it has made enormous progress compared to the 1990’s. 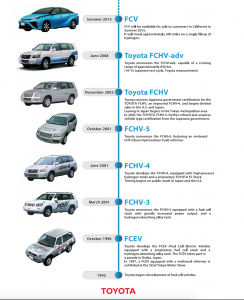 Where Toyota has really distinguished itself in my view is that it has kept on developing the Fuel Cell Electric vehicle long after most car companies sidelined the technology 15-20 years ago. Back in the 1990s, the California Air Resources Board (CARB) shocked the global automotive industry by introducing a mandate requiring that a certain percentage of cars sold in the state would have zero emissions. At the time, battery technology was far from where it is today and many automakers reasoned that the only way to comply was by using fuel cells.

A fuel cell is a device that can produce electricity directly from a feedstock such as hydrogen gas. The technology was originally developed for space exploration and the problem was to make it affordable for the mass market as well as building an electric car and an economical way of storing the gas.

The Toyota Mirai is the 7th generation of the Toyota program and is the result of a 26 year commitment to figure out the best path toward making automotive transportation fully sustainable. To date Mirai sales are just getting started as is the building out of an infrastructure to have hydrogen available at service stations. One web site reports that 3,000 of the cars have already been sold in California and my guess is that the technology will take time to take take off.

The thing is that a fuel cell car takes about 5 minutes to fill its hydrogen tank and thus may compete successfully with battery electric vehicles. From an ecological viewpoint the story is a bit more complex since most hydrogen is made today from natural gas but the introduction of the Mirai does open the door to what has been called the hydrogen economy!

In my view the truly impressive part of the Toyota story is that the company has stuck to its environmental commitments and pursued its agenda year after year and decade after decade.