As 2018 comes to an end, I thought it would be interesting to look at where we are with respect to carbon emissions using data supplied by the Global Carbon Project’s latest report which is available for download here.  The idea is to put into context the agreements reached (and not reached) at the recent climate conference in Poland and discussed in a post a couple of weeks ago.

The bad news is that global carbon emissions will have risen in 2018 despite drops in the U.S. and in Europe.

The issue, as discussed in a number of earlier posts on the subject is that emissions in China, India and other countries continue to rise as their economies improve and their people begin to enjoy a more comfortable and modern life. In term of fairness, it makes sense to also look at the per capita carbon footprint of different countries as the U.S. still has the highest level in the world. 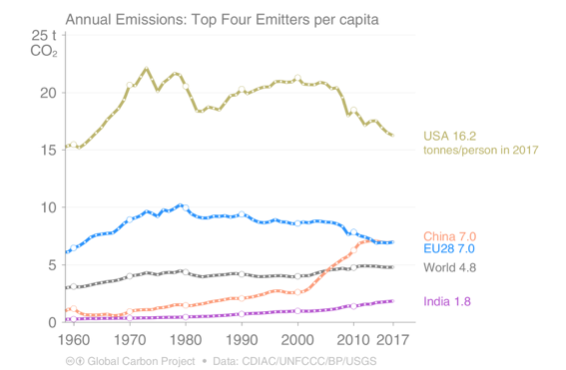 What is heartening is the steep drop in the U.S. which was due to the Obama administration’s push to a switch from coal to natural gas in electricity production, as well as increasing use of renewables across the country.

The idea behind the climate agreement reached between Barak Obama and the Chinese President, President Xi Jinping, was for both countries to reach a similar level of 10-12 Tons per person by 2030. The text of the agreement is available here and while it was far from perfect, it was much better than the current situation in which there is no such agreement besides the Paris framework which has already been rejected by Donald Trump.

Besides economic improvement, the other challenge in both India and China is an over reliance on coal – which is cheaper and more readily available. The answer is to find the money to build a different energy infrastructure for developing countries so that their people can share in the world’s prosperity without worsening the situation. 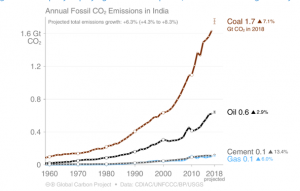 tThe amount of carbon in the atmosphere is a result of balancing carbon production with sinks or natural phenomena that consume it such as the oceans and forests. By using a combination of massive introduction of low carbon energy production and storage on the one hand, and better land use and management of the oceans on the other, most scientists agree that the problem can be fixed and catastrophic climate change avoided.

The chart above shows a number of the scenarios published by the IPCC  in their last report concerning the importance of limiting average temperature rise to 1.5ºC above pre-industrial levels.

The Global Carbon Project even as an interactive simulator with which you can imagine different scenarios for the future and you can access it here.

The good news is that there is still time to turn this around but the window for action is starting to close.