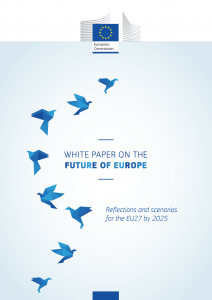 About two months before the United Kingdom is scheduled to leave the European Union,  the BBC’s guide to Brexit says that it “is impossible to say with any certainty what will happen next.”

While the negotiations and parliamentary activities have been underway, the EU itself has been looking beyond March 29, 2019 to think about where it is going and what might happen.

Almost two years ago, the EU published a white paper on the future of Europe outlining 5 scenarios for its future with a time frame of 2025. As I am a big fan of scenario planning I gave the scenarios to my MBA students to see what they thought of them.

I have 75 second year MBA students in my strategy and geo-politics class from 29 different countries. About half of them hope to work in Europe after graduation. For each scenario I asked the students to evaluate the probability of each scenario

The following outline briefly paraphrase the EU’s descriptions of the scenarios and then gives my recollection of the students thoughts.

Carrying On –  The EU27 sticks to its course, it focuses on implementing and upgrading its current reform agenda. This is done in the spirit of the Commission’s New Start for Europe in 2014 and of the Bratislava Declaration agreed by all 27 Member States in 2016. Priorities are regularly updated, problems are tackled as they arise and new legislation is rolled out accordingly.

Different students had very different thoughts in the probability of this scenario ranging from less than 5 to 20%. Their concern was that Brexit and the rise of the populist right in Central Europe had already exposed the european project to deep contradictions and that carrying on would not solve them.

Single Market Only – Since the EU27 cannot agree to do more in many policy areas, it increasingly focuses on deepening certain key aspects of the single market. There is no shared resolve to work more together in areas such as migration, security or defence.

The students thought that this scenario was highly unlikely as the singly market would not be able to function properly without movement of capital and people. The gave it between 2 and 15%. 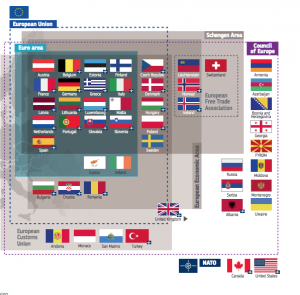 Those who want more do more – While the EU27 proceeds as today, certain Member States want to do more in common leading to one or several “coalitions of the willing” emerge to work together in specific policy areas such as defence, internal security, taxation or social matters.

This scenario was considered by far the most likely with probabilities ranging form 60-80%. The model the students used was that of the Euro and the Schengen treaty in which some EU countries are already in and others are out. Interestingly the current arrangement made intuitive sense to my European students but did seem to baffle students from other parts of the world such as Asia.

Doing less more efficiently – There is a consensus on the need to better tackle certain priorities together leading the EU27 to focus its attention and limited resources on a reduced number of areas.

The students thought this scenario had a 20-30% probability of success for the same reasons as focussing on the single market only. For them, the EU comes as a package deal and the idea of a lighter, more focused EU that only deals with obscure issues of trade or policy misses the point all together.

Doing much more together – Because there is consensus that neither the EU27 as it is, nor European countries on their own, are well-equipped enough to face the challenges of the day, Member States decide to share more power, resources and decision-making across the board.

To my surprise, most of the students were also extremely skeptical about the EU coming out of tis present troubles stronger than ever putting very low probabilities on this scenario. There were, however a few in the minority who thought that Brexit would make the EU stronger and encourage it to go further and faster towards a more meaningful and stable integration.

A week after the Brexit vote, I wrote a blog post recommending two parallel tracks. One was that whoever ended up leading the Tories should use the time to negotiate a deal that is similar to the accord that Prime Minister May proposed to Parliament last week. The other was for the EU to embark upon a deep process of reform.

The idea would be to set the stage for a second referendum which would compare a so-so deal with the prospect of staying in a much better union.

Although she has been criticized by opponents on all sides, my view is that the deal on the table is probably about as good as it can be given the limits and constraints such as the situation in Ireland.

Unfortunately, I am less convinced that the EU has changed enough to really move too many eurosceptics.