Last month, IESE’s Responsible Business Club held the 16th edition of its annual conference, Doing Good Doing Well in Barcelona. The event is truly one of the highlights of our academic year as we can tap into the ideas, energy, and passion of these men and women in their late 20s and early 30s who really want to make a difference in the world. 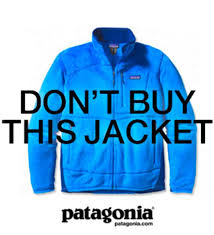 One of the speakers at the event was Ryan Gellert, the General Manager for Patagonia in Europe, the Middle East and Africa. Patagonia has always been a reference in the green economy space due to the deep environmental convictions of its founder, Yvon Chouinard, and the management team he has built up over the years. For many years Patagonia’s mission statement has has a strong environmental focus and fell into what I call “Pay for Principal” which is an environmental strategy based upon the convictions of a company’s majority shareholders. In my view Patagonia has been succesful over the years because it has attracted a customer segment which is willing to pay a premium for the highest quality outdoor gear and to some degree is happy to support those convictions.

The mission of the company has been “Build the best product, cause no unnecessary harm, use business to inspire and implement solutions to the environmental crisis“. Besides telling his personal story and talking about Patagonia in Europe, Ryan spent some time telling us about Patagonia’s new mission statement which goes even further than the previous one and is “Patagonia is in business to save our home planet.”

The United Nations Environment Program defines the Green economy as “one that results in improved human well-being and social equity, while significantly reducing environmental risks and ecological scarcities”. An increasing number of companies around the world have embraced the idea to reduce their environmental impact. Others, like Unilever and Henkel, have made such commitments an integral part of their internal and external communications.

What Patagonia is doing is going a step further and taking an activist stance on the environmental challenge and re-orienting the entire company to be a force of positive change. 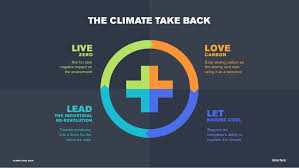 Interface, a carpet manufacturer based in Atlanta, is another firm which has now changed its mission to go beyond sustainability. The late Ray Anderson had taken Interface on its sustainability journey in 1994 and up until recently the target had been what they call “Mission Zero“. Like Patagonia, Interface’s new mission goes beyond doing less harm and is built around the idea of “Climate Take Back” or reversing the process of climate change.

The approach of Patagonia and Interface are similar in direction to the work of Gunter Pauli who published the first edition of The Blue Economy in 2010. Pauli, who founded Ecover, a leader in sustainable soaps, sold that business when he realized the devastation that palm oil was doing to the rainforests of Indonesia. His view has been for years that the green economy was a flawed concept from the start and a new paradigm was needed.

Pauli recently spoke at IESE Business School’s Energy Day and explained that the failure of goods and services provided by the green economy was that they were, in general, too expensive and only available to the affluent. What he argues for is a new approach that takes inspiration from nature and uses non-linear feedback loops and multiple revenue streams to design systemic solutions to the world’s problems. In his books and on his web site, he highlights over 100 projects and initiatives which provide ecologically sustainable products at low cost and also stimulate local employment. For Pauli, reducing environmental impact is like stealing less. Its still wrong.

Another of Pauli’s convictions is that the next generation will lead the change and he therefore is developing a line of children’s books or fables which outline the concepts behind the Blue Economy and encourage children to think outside of the box that our industrial and consumerist society has built.

Examples of the kind described by Gunter Pauli and the new missions of Patagonia and Interface underline the role that business can play in not only going beyond legal compliance but even beyond the goal of sustainability itself.