Abu Bakr al-Baghdadi, the apparent head of what used to be the Islamic State has posted a video showing that he is very much alive despite being out of sight for the last five years and being reported killed by Russia.

Baghadi’s full name is Ibrahim Awwad Ibrahim al-Badri. He is an Iraqi with a Masters Degree in Quranic studies and was reportedly enrolled in the PhD program at Saddam University before setting up a Sunni militia to fight the U.S. troops which had invaded the country. According to the Counter Extremism Project, Baghadi was actually held by American forces at Camp Bucca in Iraq for a number of years until being released. After his release he managed to unify command of the Islamic State and proclaimed himself Caliph and rightful leader of Islam.

What is most important is not so much Baghadi’s survival  but the fact that the ideology that the group defends still resonates with some people and an estimated 13-15,000 fighters are still at large. 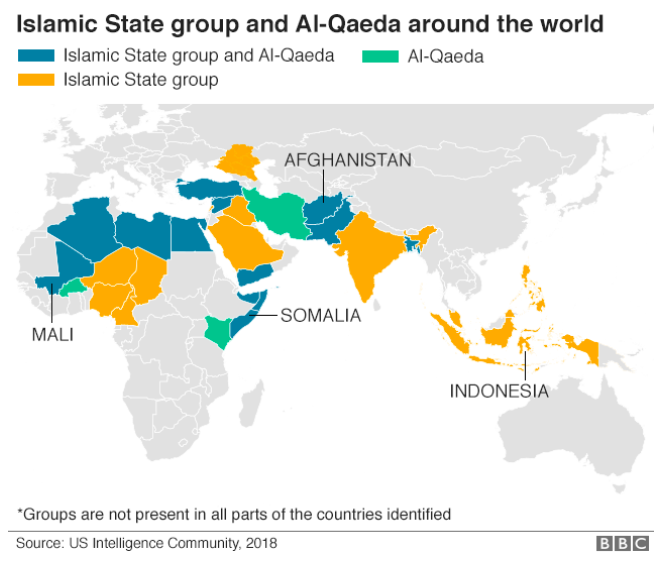 In his speech Baghadi claimed responsibility for the attacks on churches in Sri Lanka that killed over 250 people on Easter Sunday and linked them to the final defeat of the Islamic State in Baghouz, a village in Syria. You can read an english translation of the speech here.

The speech is worth reading in its entirety as it gives a very clear message to the supporters of the Islamic State that they should be patient and that the war is far from over. He also appeals to the wider community of Islam and specifically calls for the people of Saudi Arabia and Jordan to rise up against their governments.

Towards the end of the speech Baghadi makes reference to terror cells operating in the West urging them to strike. He said “we congratulate the fierce lions in the lands of the Cross—Canada, Europe, and elsewhere—on their noble deeds in support of their brothers. May Allah bless your endeavours and accept your tremendous heroism. Proceed and follow in their footsteps, O supporters of the Khilafa. Make whatever preparations are easy for you, place your trust in the Most High and Capable, select your targets, and carry out a strike that will tear out their hearts and make them lose their minds, for a piercing bullet, or a stab deep in the intestines, or the detonation of an explosive device in your lands is akin to a thousand operations here with us. So equip yourselves for your war, and ignite its fires so that its flames may consume the Crusaders and the murtadeen.”

By Crusaders he means the west in general. The Murtadeen are what he and his group considers apostates.

While catching him and as many of the former fighters as possible is clearly important, the bigger question is build stronger bridges between the people of the world.

In an example of the way forward, in honor of Pope Francis’ historic visit to Morocco in March, the Morocco Philharmonic Orchestra played a special concert showing how Muslims, Jews and Christians can respect one another in peace. Watching the concert is a the best therapy after reading the translation of Baghadi’s speech.