After months of trying to get her government’s Brexit deal through parliament, Theresa May has finally announced her upcoming resignation. Her announcement, that she will resign on June 7th, gave a frank admission that she had failed to find compromise between the different strands of political opinion as well as a list of the achievements of her administration in all areas besides Brexit.

My understanding of the deal that she has attempted three times to push through is that it allows the UK to officially endorse the results of the referendum without actually cutting most of the critical ties between it and the rest of Europe.

The New York Times gives a list of MPs who have announced their candidacy to replace Mrs. May and it includes people who support her line of compromise such as Michael Gove and Jeremy Hunt and others who want to have a harder Brexit such as Boris Johnson and Dominic Raab. The words used to describe a hard Brexit are to call it either a “clean break” or “crashing out of the EU” depending on the who is talking.

My view of Mrs. May’s tenure in the role is that she took the job with the express intention of avoiding a hard Brexit at any cost and maybe even never intending to allow Brexit to proceed. In my view this is the only explanation that fits her government’s gross mishandling of the process.

Think about it. Would the government of the United Kingdom, with its long history of extraordinary diplomacy and deep bench of skilled government officials really send an ill prepared and inexperienced team to negotiate something this important by mistake? Would Mrs. May call for a snap election in June 2017 and find herself losing her parliamentary majority due to miscalculation? Would she place a plan before parliament three times knowing full well that it would fail each time? 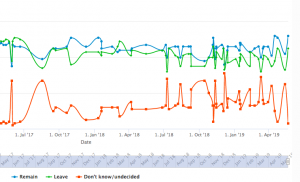 Every move, every vote and every emergency extension of the deadline has served to draw the process out and give greater strength to that segment of civil society who call for another referendum and an end to Brexit. In the recent local elections, the Conservative party lost over 1,300 of their local council seats while the pro-European Liberal Democrats won an unprecedented 700 seats in a clear signal of what parts of the electorate think think today.

According to NatCen, a social research group which runs a web site called whatukthinks.org, remain would win a new referendum today by 52 to 45%. Although the UK voted in the European elections on Thursday, the results will not be announced until later today as the last countries go to the polls. The hard Brexit UKIP is expected to do well in the vote as a result of frustration by pro-Brexit voters in Mrs. May ‘s failure to deliver.

Even in her leaving the scene, Mrs. May stalls for time. Rather than resigning last week, she announced that she will resign on June 7th. Her party will have to go through an arduous and complicated election process that is hoped will be over by the end of June.

The new Prime Minister will then need to form a government, figure out what to propose to Europe and Parliament and then try to get it to a vote. It seems unlikely that this will be possible before parliament breaks for its summer recess which normally happens in late July.

What might occur is a major battle over a new plan in September with the new October 31st deadline for a negotiated Brexit settlement looming over it. If that plan were to fail and the new Prime Minister was unable to govern, then perhaps he or she would have to call for new elections which would take at least another 6 weeks.

After her announcement, Boris Johnson answered Mrs. May on twitter, thanking her for her  “stoical service to our country and the Conservative Party”. That service, it seems to me, has been to delay Brexit as long as possible and to work for either a repeal of the whole idea or at worst a deal which leaves as much as possible intact while allowing the public to feel that the referendum was respected.