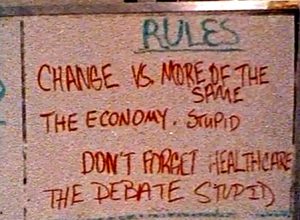 In the early days of the 1992 presidential election in the United States, , James Carville, a democratic political consultant, identified three rules to guide Bill Clinton’s successful campaign for his party’s nomination and the general election against George H. Bush. The first identified the promise of change and became the watchword of the campaign and would later be key to both Barack Obama’s and Donald Trump’s election.

The second was “The Economy, Stupid” and Clinton hammered away at Busch essentially blaming him for the 1990 recession and relatively sluggish recovery. Carville’s point, which is backed up to some degree by academic research, is that people will vote against the incumbent if they think they are or will be worse off economically.

The good news for the Democratic Party is that many sources including Fortune magazine are forecasting an economic slowdown in 2019 and often the blame is put on Donald Trump’s trade policies which are starting to be felt around the country and hitting at the overall confidence level of American business. My guess is that this will be the number one issue in the 2020 campaign.

As the election season gets underway, it looks like issue number two might be the environment. As I have pointed out a number of times in this space, Donald Trump’s administration has worked to undo 45 years of progress on environmental issues which began under the Nixon administration with the establishment of the Environmental Protection Agency in 1972. National Geographic recently published a list of 15 ways that the administration has hurt the quality of air, water and the protection of wildlife.

The Democrats, on the other side fully embrace the Paris Climate Accord and many have gotten behind the New Green Deal proposed by new York Congresswomen Alexandria Ocasio-Cortez and Senator Ed Markey  from Massachusetts.

Joe Biden, the former Vice President who is ahead in the polls, has embraced the New Green Deal and gone even farther on some issues with his own environmental plan which promises to:

According to analysis done by Real Clear Politics, a website, Joe Biden will defeat Trump in a head to head race by a significant margin in virtually all the polls including that done by Fox News.

As we ramp up to the next election my guess (or hope) is that the environment will take center stage as it is much more important than the constant stream of noise coming from Donald Trump. Americans as a general rule want to take care of nature and do the right thing. Joe Biden and the other democratic contenders will appeal to their better natures and I fervently hope win the election and get the country moving in the right direction again.