During a trip to Asia this summer I spent a few days in Singapore and Manila meeting with executives, former students, and some diplomats speaking about geo-politics and the link to business.

Not surprisingly the biggest geo-political concern facing the people I met in both places was China and the complex relationship between China and the United States.

The history of both countries in very different but they both share some aspects and both are caught in the current trade war and geopolitical conflict between the two super powers.

Modern Singapore was founded by Stamford Raffles, the English Lieutenant-Governor of Bencoolen in Sumatra in 1819 who leased the island from the rulers of Johar and developed it as part of the larger struggle between the English and the Dutch for control of the region.

If you manage to get there, you can see the history at the National History Museum which lays out Singapore’s emergence as a critical piece of Great Britain’s network of coaling stations in South East Asia until its occupation by the Japanese in 1942. After the Japanese surrender, Singaporeans  pushed for independence and achieved limited self rule in 1959.  A  lawyer and nationalist advocate, Lee Kuan Yew became the island’s first Prime Minister. After a brief unification with Malaysia, Lee Kuan declared Singapore’s independence in 1965 and proceeded to lead it until his death in . Under his leadership Singapore negotiated its merger with the newly formed state of Malaysia but then broke off as an independent country in 1965.

Under Lee Kuan’s leadership, Singapore emerged as a financial and industrial powerhouse in South East Asia achieving unprecedented wealth and prosperity. In 1967 Singapore joined Indonesia, Malaysia, the Philippines, and Thailand in creating the Association of Southeast Asian Nations (ASEAN).

Although not an official ally, Singapore has been working in close military cooperation with the United States for over 50 years, according to the Brooking Institution, and signed an memorandum of understanding in 1990 allowing the U.S: Navy to use its facilities.

Lee Kuan’s son, Lee Hsien Loong is the current Prime Minister of Singapore and has re-affirmed the tie in with the United States as recently as May, 2019-

Part of the impetus for the 1990 agreement with Singapore was the closing of the United State’s two major military bases in the region which were located in the Philippines in 1990. The Clark Air Force Base and the Subic Bay Naval station were part of the legacy of the American occupation of the Philippines that lasted from 1898 to 1946. The Americans took The Philippines from the Spanish as a result of the Spanish American War.

Ferdinand Megallan “discovered” the Philippines for the Spanish crown in 1521 and it became an official colony in 1565. Spain ruled over the archipelago for the next 333 years managing to put down periodic independence movements such as that associated with the country’s national hero, Jose Rizal, who was executed in 1896.

Like Singapore, The Philippines were occupied by the Japanese during World War II and was granted its independence after liberation.

Due to its long relationship with the United States, the country maintained close military ties to the U.S. after independence and especially during the long tenure of Ferdinand Marcos who was president from 1965 to 1986. The two bases were closed during the tenure of Corazon Aquino after a breakdown in negotiations over the lease the U.S. was paying for the land.

The U.S., however, has enjoyed a close relationship with subsequent administrations until the election of Rodrigo Duterte in 2013 who had a particularly bad personal relationship with Barak Obama. Since he has been in office Duterte has travelled to China 5 times and not been to the U.S.

Stuck in the Middle

Both Singapore and The Philippines were parties to the Trans Pacific partnership which was the plan that the Obama Administration (and Secretary Hillary Clinton) had to further cement the countries of South East Asia to the American side in the looming trade war with China.

Having seen that agreement scrapped by Donald Trump, both countries have been moving closer to China in terms of economic cooperation. China’s proposal is the One Belt, One Road initiative which promises infrastructure investments, trade, and strict non interference in domestic issues.

In terms of geo-politics, what is at stake is the future of the South China Sea which is claimed by China despite the most recent ruling of the United Nations Convention on the Law of the Sea (UNCLOS)  that defended a claim made by the Philippines that dates back to the 1950s concerning the ownership of some islands between the two countries. 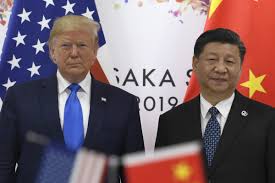 In speaking with former students and business leaders in both countries, what seems to have emerged is a consensus to continue to do business with China – the more the better – but to rely on the United States for military protection in case it is needed sometime in the future.

The danger, according to Robert D. Kaplan, author of Asia’s Cauldron, is the gradual absorption of the region into China’s economic sphere of influence. Most economists agree that the world economy will gradual shift to Asia in the next 20-30 years and this is the back drop in which the current tit for tat trade war is playing out.

2 thoughts on “Stuck Between China and the U.S.”