Last Saturday a number of explosions rocked two of Saudi Arabia’s oil processing facilities on the western edge of the country disrupting about half of the kingdom’s crude oil output. Ansar Allah, the organization known as Houthis in Yemen claimed responsibility for the attack and said that they carried out the attack with a number of armed drones launched from Yemen.

The Houthi’s position is that the attack, and the 18 similar strikes using drones and cruise missiles that it carried out in the last 2 years, is a legitimate response to the bombing of Yemen done by the Saudi led coalition that has been waging an inconclusive war against the Houthis since 2015.

Both the Saudis, Donald Trump and Mike Pompeo, the current Secretary of State, were quick to blame Iran for the attack although at that time it was unlikely that they had yet to ascertain any hard evidence of Irani involvement.

World oil market spiked on the news and have only dropped back down as Saudi Arabia has announced that it will have its facilities repaired and fully operational in a few weeks.

On Wednesday, Saudi Arabia showed a number of pieces of what it said were the remains of the drones and cruise missiles used in the attack which it maintains were manufactured in Iran. The Saudis also have some evidence that at least some of the weapons approached from the North indicating that they did not come from Yemen but so far have not been able to establish the original launch site.

Iran has denied all along that it carried out the attacks and on Friday threatened “all out war” if the Saudis or the United States were to take military action against his country.

The latest move from the Trump administration was to place further sanctions against Iran showing once again how closely the administration follows Saudi Arabia policy. In my view, the most publically appalling example of this administration’s support for the Saudi monarchy was its acquiescence in the murder of Jamal Kashoggi although continued U.S. support for the war in Yemen is far worse as as many 60,000 people have died in the war and the famine that it has caused.

Although the Obama administration also supported the Saudis at the start of the conflict, President Trump has gone further in his support and vetoed a bill that passed both the House and the Senate to end U.S. involvement in the way last May. 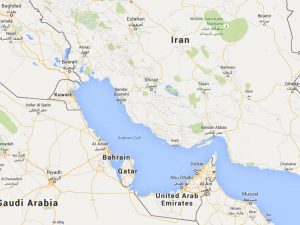 As I have written in this space before, my view is that Saudia Arabia and Iran are locked in a multifaceted struggle for control of the region and this will continue for some time. In this context, the role of the US Navy’s 5th fleet stationed in Bahrain can not be underestimated. The fleet has been deployed in the Gulf since 1995 and is thought to have enough firepower to destroy the Iranian Navy and Airforce in the event of all out war. Without it, the Saudis may not be able to hold their own.

My understanding is that the fleet was deployed primarily to protect tanker traffic in the Gulf at a time when the United States was still importing huge amounts of oil from the region. Today 80% of gulf oil flows East to Singapore and China and the United States is close to energy independence.

This last week Donald Trump said that he was ready to go to war with Iran over its supposed support to the Houthis and the possibility that it fired the missiles and drones. Interestingly, the world oil markets do not seem to think that such a war is likely and I hope they are right.