When Jim Mattis resigned as U.S. Secretary of Defense last December I wrote a post about my concern of what that would mean for the people and fighters of Rojava, the Kurdish region of Norther Syria. As I wrote at the time of his election the presence of four Generals in his cabinet reassured me that while Trump was unstable and unpredictable, accomplished public servants such as Mattis and General John Kelly would keep him in check and not let him do anything too stupid.

Since January Trump has been surrounded only by people who are totally loyal to him regardless of what he does or say. This was clearly in evidence when he made his now infamous requests to Ukrainian President Volodymr Zelensky to investigate Joe Biden’s son. Trump says the call was “a very friendly and totally appropriate call” and the White House has released what it calls a partial transcript which you can read curtesy of CNN here. According to reports about the call the aides who were listening were appalled at what they heard and the tape and subsequent transcript were classified and an effort was made to suppress it

The other part of the story is that $ 400 millions of dollars in military assistance to the Ukraine were delayed while the President’s lawyer, Rudy Giuliani, travelled to the Ukraine to make it clear that there was a link between the favor that Trump requested and American government assistance in fighting Russian backed militia in the Eastern part of the country. An example of the dozens of stories on this subject can be found in Defense News.

This is the issue that convinced the Democratic party to begin the process to impeach Trump and possibly remove him from office. As I have explained in other posts, impeachment in the U.S. is fundamentally a political process as the U.S. constitution is deliberately vague on what counts as an impeachable offense. For a President to be removed form office, the House of Representatives must pass, by simple majority, articles of impeachment or in other words the list of “high crimes and misdemeanors”, to quote the constitution. These then are discussed in the Senate and two thirds are needed to convict.

In the case of the Republican attempt to impeach Bill Clinton in 1998, the House passed 2 of the four articles presented to it and in the Senate he was acquitted on one while the other ended up in a 50-50 vote which is far short of the 67 required. To impeach Trump, the Democrats will have to have all of their 45 senators as well as Angus King (Maine) and Bernie Sanders (Vermont) who are independents and 20 Republicans to vote to convict.

There are, however, 19 Republican Senators who are up for re-election including Mitch McConnell, the Senate Majority Leader and Susan Collins from Maine. Depending on how the voters in their state see the issue, these Senators may feel that they need to take the moral high ground in a vote on impeachment or face a certain loss in November 2020. In addition to them there are other Republican Senators such as Mitt Romney who have no love for Trump and others such as Lindsey Graham who are very upset about his latest decision to abandon the Syrian Kurds.

In my view the strong arm tactics on the Ukraine are clearly reprehensible but the betrayal of the Kurds is much worse. Trump has tweeted that he made the move due to his “great and unmatched wisdom” and has given permission to Turkey to attack the fighters of Rojava, the Turkish enclave in Northern Syria which provided the ground troops in the fight against ISIS in Syria.

Trump’s tweet seems to imply that he has given Recep Erdogan limited permission in its new war and that may be to create a buffer zone between Turkey and Syria. The Turk’s have said that there intention is to forcibly move the millions of Syrian refugees to this border area which might create another humanitarian disaster. The fact, as reported by Mother Jones, that there are two Trump towers in Istanbul and that Trump’s partner in the country is close to Erdogan is just another example of how sleazy this administration is.

A full blown impeachment process may distract the public from the democratic primary and allow Donald Trump to remain in the spotlight. The issue in the Ukraine is, however, so far over the line that Democratic House Leader Nancy Pelosi had no choice but to start the process. 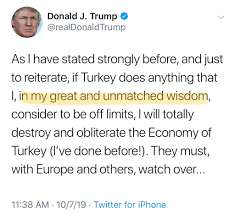 One way that Republicans could avoid impeachment is to invoke article 4 of the 25th amendment and say that Trump has lost the plot and “is unable to discharge the powers and duties of his office”. Article 4 allows the Vice President and the Cabinet (or some other congressional commission) to declare that the President is “unable”. The Presidency then falls to the Vice President and if the former President then insists then he is actually able to function, then Congress gets involved and needs a two thirds majority of both houses to keep the V.P. in place.

Last year at this time there were rumors that Vice President Pence was considering doing just that although he denied it.

Either through impeachment, article 4, or the election in 2020, the sooner we have a change in Washington the sooner the world can back to fixing some its urgent problems.